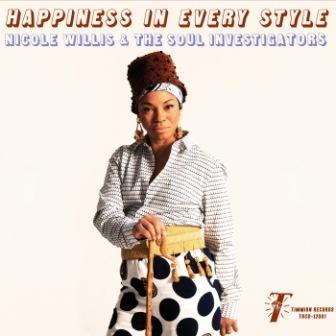 Brooklyn’s Nicole Willis won an army of fans with her ‘Tortured Soul’ album from two years ago. Backed by the so-so solid Soul Investigators, the album was a proper old school soul set…. no gimmicks, no concessions to whatever was the then current vogue, just a clutch of decent tunes delivered with passion and commitment.

This new collection, ‘Happiness In Every Style’, offers more of the same, though overall Nicole’s latest soundscape is a little more up-tempo and optimistic than what was on offer on ‘Tortured Soul’. The first inkling of the lighter mood came with the set’s first single – the breezy, brassy ‘One In A Million’. Released back in August, it soon became a favourite across the soul spectrum…. its tempo, optimism and honesty appealing to both the Northern and Moderns soul crowds. It’s one of the album’s highlights; one of those great soul songs that just somehow manages to make you smile every time, though you don’t really know why. ‘Let’s Communicate’ offers more of the same –though it’s not quite as catchy. ‘Paint Me In A Corner’ is another sweet mover – perfect for the Northern scene. ‘Hot Sauce’ is yet another “up” moment – though this is a loose, band workout rather than a “proper” song with Nicole offering occasional exhortations.

If you enjoyed the sombre moments of ‘Tortured Soul’ you’ll find more here – all counterpoints to the aforementioned optimism. Try the blues-tinged ‘Angel’, the sombre ‘Open Sky’ or the haunting ‘Thief In The Night’.

Add to all those a rolling mid-tempo groove (‘Where Are You Now’) and a couple of funky, flute-led instrumentals (great vibes on the sinister ‘Vultures Prayer’ by the way) and you have a satisfying, proper soul set which comes highly recommended, especially if you dig the whole Sharon Jones/Saun and Starr/ Dap Tone thing.