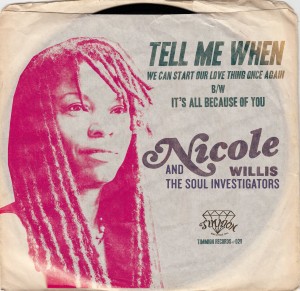 Nicole Willis and her Soul Investigators debuted in 2005 with ‘Keep Reachin’ Up’. The album was a great collection of retro soul and funk and the lead single, ‘If This Ain’t Love’, was so authentic that it fooled some died-in-the-wool Northern soul fans into thinking that they’d uncovered some long-lost, rare artefact from the genre’s Golden Age… that’s how good it was!

It’s taken quite a while for the team to come up with a follow-up collection, but the wait’s been worth it ‘cos ‘Tortured Soul’ is another fine soul set – crafted with love and commitment. Like ‘Keep Reachin’ Up’, this new set is raw and passionate. You can feel the enthusiasm in each of the eleven tracks and though the music has its roots firmly in the past, that enthusiasm prevents it becoming mere pastiche… it’s totally convincing.

My guess is that many of those who come to the album will be looking for another ‘If This Ain’t Love’ –a club dancer par excellence. They’ll find it in the frantic ‘Break Free (Shake A Tail Feather)’. With a rhythm pattern that might remind you of Cliff Nobles’ ‘The Horse’, it’s a perfect Northern soul confection. Rough and ready maybe, but that really is its appeal. ‘Time To Get Business Straight’ will delight the Northern brethren too. It features wild guitar, tinkling vibes, tight beats and a quirky laid-back vocal that is at odds with the fuzzy guitar… but it works.

For those of a more sedate mien, there’s plenty that will please. I kept returning to the gentle ‘I’ll Just Sit And Daydream’ – but then I’ve always been a fan of the relaxed, laid-back sound of Barbara Lewis. The ballad ‘On The East Side’ takes southern soul as its reference point while the slow, building ‘Delete My Number’ is threatening, even ominous. ‘Tell Me When’ and ‘It’s All Because Of You’ are much lighter and the opener ‘Light Years Ahead’ is another stand out – flavours of Curtis Mayfield’s ‘If There’s a Hell Below’ about this one. And that’s the problem with this album –though “problem” is maybe the wrong word… better to say “attraction”. Throughout you’ll be asking yourself where has that line come from, where have I heard that riff before and what does that remind me of? In the end though it’s all down to Nicole Willis and producer Didier Selin. She has the committed old school soul voice; he provides the proper, organic setting for it.