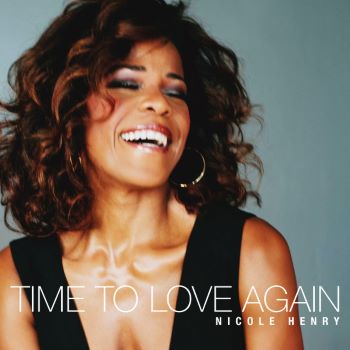 Nicole Henry is an American jazz singer who works in and around Miami. (She did, though tour the UK in 2019 in an Aretha tribute show). She’s been on the US scene since 2004 and has released seven albums. ‘Time To Love Again’ is her eighth long player and it received plenty of positive reviews from the US press last year. The “Jazz Page” for instance described the nine tracker as “a truly superb recording from start to finish…uplifting and poignant”. Maybe that praise (and plenty more like that) prompted some of the more savvy European soul and jazz stations to seek out the album and to playlist some of the tracks. On the back of that support Ms Henry and her team are re-promoting ‘Time To Love Again’ and if you’re a fan of classy smooth, lounge jazz, impeccably performed with conviction and a soulful undertow, then investigation here will yield plenty of rewards.

The album’s repertoire is a seemingly mixed bag – eclectic even, probably reflecting the material Ms Henry performs in the bars and lounges of her Miami hinterland. She’s as at ease tackling the “great American Songbook” (Rodger’s and Hammerstein’s ‘I Didn’t Know What Time It Was’) as she is giving familiar soul a distinct workover (Stevie’s ‘Overjoyed’). Amongst the other cuts are versions of ‘Feeling Good’ (best known maybe in its Nina Simone version), Sade’s ‘It’s A Crime’ and ‘Wild is the Wind’ (originally a 50s hit for Johnny Mathis). That list should give you a feel of the breadth of material; then there’s a take on Joan Armatrading’s ‘Love And Affection’ and, maybe the most unusual, a cover of Buffy St Marie’s folk classic ‘Until It’s Time For You To Go’ . The album’s most alluring track is a laid back cover of Maria Muldaur’s ‘Midnight at the Oasis’, made the more laconic with the addition of some melancholy harmonica from Swiss-born harmonica player and composer Gregoire Marét.

What gives this seemingly disparate material a unity is Ms Henry’s convincing delivery and her team’s successful attempts to deliver the familiar in new settings. Sure, there’s nothing here that’s too radical or experimental; just sound, pleasing interpretations of some great songs – the kinds of thing that I’m sure Nicloe delivers in her live shows which after all is probably her bread and butter.