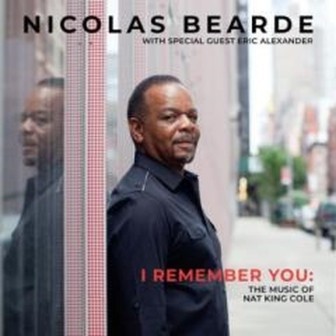 It can’t have escaped your attention that 2019 marks Nat King Cole’s centenary. To celebrate the “100 up” much of the maestro’s back catalogue has been reissued alongside plenty of rarities (particularly an “international” version of his hits), at the same time plenty of artists have offered their own tributes via their own interpretations of the Cole repertoire. Most prominent, of course, was the Gregory Porter collection.

Latest to offer a Cole tribute is acclaimed jazz baritone Nicolas Bearde… a lifelong fan of Cole and one of his chief inspirations and influences. Refreshingly, Bearde’s King Cole homage is a little different to most of the others available. For starters Nicolas has avoided covering too many of Cole’s “big songs”. So no ‘Mona Lisa’ or ‘Nature Boy’ here; ‘L-O-V-E’ is probably the most “Cole-associated” song on this menu. Instead you can enjoy things like ‘The Rules Of The Road’, ‘Thou Swell’, ‘That Sunday, That Summer’, ‘Funny Not Much’ and ‘I Remember You’ for which the album is titled.

The second way in which this Cole collection is a little different is in the song treatments. The arrangements are new and fresh and all but three of the tracks use the classic piano, drums and bass accompaniment. Eric Alexander’s tenor sax adds colour to ‘That Sunday, That Summer’, ‘Funny Not Much’ and ‘Thou Swell’.

Thirdly, it’s Bearde’s elegant baritone that makes this song selection special and different. Nic’s warm and caramel-infused vocals offer fresh perspectives without losing any of the inherent romance and heartbreak of the Cole versions.

Nicolas Bearde: ‘I Remember You’ is released on August 30th and Nicolas will be appearing at Pizza Express Soho on Wed. August 21st.