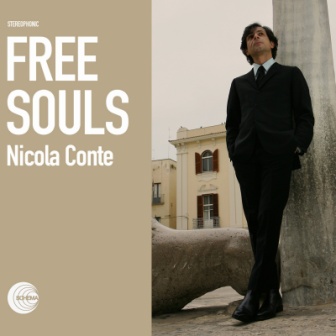 Nicola Conte is an Italian jazz guitarist/DJ/producer/all round good guy who’s built himself a decent reputation on the soul and jazz underground. This new 13 track album was recorded in the southern Italian town of Bari, but drop into any of the grooves here and you’d be fooled into guessing the musical provenance was New York. Conte and his combo, you see, cook up a brand of cool soul-jazz that recalls the best of Blue Note … little wonder that key cuts from the set are getting maximum exposure on stations like Jazz FM.

One of those key cuts is a smoky, smouldering cover of Bobbie Gentry’s ‘Ode To Billie Joe’. The vocal is taken by Brit school alumnus Bridgette Amofah. She’s best-known for her work with dub-step outfit Rudimental but here she comes on like a proper down-home Southern girl and Conte and his team inject just the right amount of steam and sweat into their backing track. Ms Amofah’s also out front on the album’s title cut and a cover of ‘Baltimore Oriole’. The former is a decent soul groove while the latter is a loose jazz workout. Bridgette’s just one of several guest singers. Jose James (who Conte helped to bring on in 2008) takes the mic for ‘Goddess Of The Sea’ (shades of the great Mark Murphy sound here): Melanie Charles takes lead on the Afro-centric ‘Spirit Of Nature’ and a cover of Ahmad Jamal’s ‘Ahmad’s Blues’; Marvin Parks features on three cuts – the lovely ‘Shades Of Joy’, the samba swinger ‘If I Should Lose You’ and ‘African Other Blues’: the Tasha’s World crew are featured on ‘Soul Revelation’ and ‘Uhuru’; while Heidi Vogel vocalises ‘Sandalia Dela’. That last one is a great little summer samba, by the way.

That leaves just one complete instrumental – the free jazz closing cut, ‘Sunrise, – a vehicle for Logan Richardson’s alto sax. The other big guest instrumentalist is Greg Osby who brings his mellifluous sax tones to the aforementioned ‘Ahmad’s Blues’.

It’s the wealth of vocals, though, that make this album unlike anything Conte has offered before and the variety of the voices he’s chosen has ensured that ‘Free Souls’ never flags… little wonder Jazz FM has found plenty here to playlist