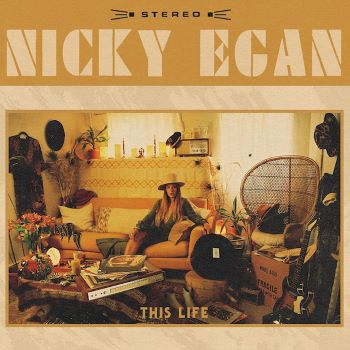 NICKY EGAN is a US singer/songwriter from the Philadelphia area. She always wanted a musical career and to that end she studied at the Berklee College of Music winning  a degree in Contemporary Writing and Production. From there she decamped to Brooklyn working with outfits like Chicano Batman, Tune-Yards, Carla Morrison, and funk band Turkuaz.

Eventually Ms E decided to strike out on her own and working with New York based producer and Dap-Kings guitarist, Joe Crispiano she began recording , releasing  a series of (what she called) “digital 45s”.  The music on those releases was eventually collected and issued on a 7 song EP and, encouraged by critical acclaim, she began work on a full album, the just issued ‘This Life’.

The album’s focus cut is clearly the title song, ‘This Life’. The cut’s a gentle but never sentimental ballad and Nicky explains why the album is named for the song. She says that the set tells the tale of life’s journey … “the moments of transience, growth, acceptance, and reflection that we experience throughout our short time here.”. It’s one of the album’s highlights. Other cuts that stand out are the mid-tempo groove that is ‘Every Part’ and the soulful ballad ‘Back To You’.

Elsewhere, the opening ‘Changes’ marries garage rock with a Northern soul vibe while the ballad ‘Funny Feeling’ betrays the influence of Memphis soul. And, yes, there is soul right across the 10 tracker – but it’s  that modern, blue-eyed take on the genre… analogue-recorded, organic, a little rough around the edges and packed with enthusiasm. Vocally critics have compared Nicky Egan with Bonnie Raitt and Janis Joplin – so you get the picture. Neither were “proper” soul singers but there was a soul undertow to much of their work. Though, Ms Egan currently lacks the vocals depth of those two, you can hear the same soul undertow in her work.

‘This Life’ is out now via Transistor Sound in partnership with Colemine Records.