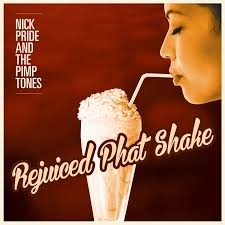 Nick Pride and the wonderfully named Pimptones hail from Newcastle but to get their music out there they needed to decamp to the continent. They debuted in 2011 on an Italian label with ‘Midnight Feast Of Jazz’ – a raw, funky collection that drew comparison with the similarly named Daptone crew. Three years down the line and guitarist and producer Nick Pride has taken his team to German label, Légère Recordings, and this latest 14 tracker takes the Pimptone concept to the next level.

There’s still just enough of the band’s signature, powerful and brass-fuelled, instrumental funk and soul-jazz to satisfy the old fans…. the brief, album-titled intro jam tells you that. There’s also the atmospheric ‘Soul Food Strut’ but aside from those (and a brief interlude) the LP’s other 11 tracks are vocals. Apart, you see, from being a dyed-in-the-wool funkateer, leader Pride is also a lover of well-crafted pop and soul songs (he numbers amongst his heroes Burt Bacharach and Holland, Dozier and Holland) so for ‘Rejuiced Phat Shake’ he’s tried ( an largely succeeded) to marry that predilection to the band’s original gritty sound.

Best of these new cocktails are ‘Take Care Of My Love’ … with Susan Hamilton on vocals it’s as authentic a piece of Northern soul as you’ll get in 2014, and the lovely pop/soul of ‘Everything’s Better In The Summertime’ – vocal here courtesy of Karen Harding. ‘Wanna Treat You Right’ is another that shows Pride’s love of classic soul-tinged pop. Great vocal, too, from Mickey Moran Parker. ‘Why Does My Man Got To Be So Tough’ is meaner and funkier with a gritty old school Pimptones’ backdrop behind Beth Macari’s vocal. A flavour of Sharon Jones here, while ’99 Reasons’ (vocalised by Lane Thornton Hewitt) is the band’s James Brown homage –right down to the ‘Papa’s Got A Brand New Bag’ guitar sound. For a different feel try ‘Walkin’ Out The Door’. This one’s a loose New Orleans style gumbo of a cut with Lyndon Anderson at the mic. It works much better than ‘Non Stop’. Here Dubbul O’s rapping is at odds with the backing track and the Courtney Velecia vocalised ‘Hex On My Soul’ kind of sits between downtime Amy Winehouse and out take Adele.

‘Rejuiced Phat Shake’ is much more diverse and by extension more interesting than the Pimptones’ earlier work and with the right support it should bring this fine band to a wider audience. Find out more @ www.legere-recordings.com