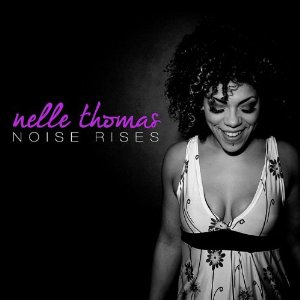 Nelle Thomas is a Canadian singer/songwriter who’s dubbed her style and sound “modern Motown”. She says her work is inspired by the soul music her parents listened to, though she adds that she’s also been influenced by Amy Winehouse, The Robert Randolph Family Band and folk music! Quite a breadth there… and in fairness that width is reflected in the diversity in this, the lady’s debut long player. Despite Nelle’s assertions the music’s hardly Motown (at least as I understand it), but there’s a soulful undertow that shines through even on rockier items like ‘Never Been Accused’ and ‘Eleven Dollars’. A much better soul bet is the brash and brassy opener ‘Gonna Get Over’. It has elements about it that Berry Gordy might be happy with – ditto the appealing ballad that is ‘Tell A Sad Story’. This one features some pretty vibes too.

Elsewhere, ‘Noise Rises’ is a country-tinged ballad while ‘One Day At A Time’ has its roots in the blues. ‘Bar Fool’ (clever lyrics here) is classy pop while ‘Roulette Wheel’ is looser – almost jazzy. Most interesting cut is the innovative ‘(Dance Of The) Freaks And Geeks’. It’s catchy and happy (it even includes a rap) and again Nelle’s penned lyrics that are a cut above your average pop/soul standard. They’re quirky and in some ways that’s the best description of the album. It’s all very personal (often intimate) and covers a wide range. What holds it all together is Nelle’s vocal – a smoky alto that brings real warmth to the material. The set just lacks one really big song – a tune that reaches out and grabs you. Maybe an innovative cover version could have done the trick. As it stands ‘Noise Rises’ is a decent and interesting debut from a promising vocalist. Find out more @ www.nellethomas.com