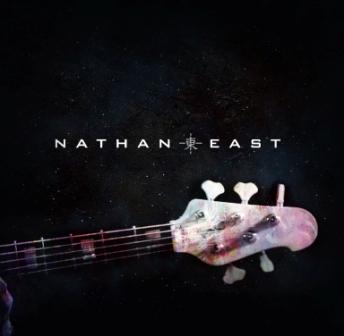 Genre-crossing bassist Nathan East is one hell of a busy man. His pro music odyssey began when he was just 16 playing in Barry White’s road band. From there he went on to play sessions with anyone and everyone… Quincy Jones, Eric Clapton , Phil Collins, Michael Jackson, Lionel Riche, George Harrison, Anita Baker, Stevie Wonder and many, many more. He’s still the man the stars come to when they need a rock steady bass line and of course, in between all that, he’s a core member of super smooth jazz outfit Fourplay. He also finds the time to make his own music and this lovely, eponymous 14 tracker is his latest solo offering. Though to call it a solo set isn’t quite accurate. Indeed Nathan himself describes the long player as “everybody’s record”… and those “everybody’s” number amongst them Eric Clapton, Stevie Wonder, Sara Bareiles, Michael McDonald and two gents called Bob James and Chuck Loeb…. both, of course, Fourplay confreres.

And it’s an old Fourplay tune that kicks things off here. ‘101 Eastbound’ is a light n’ lovely opener; a gentle bossa nova with a hint of the Tania Marie’s about it. Other instrumental highlights include ‘Letter From Home’ (a tune that would sit perfectly on any Ibizan chill-out set), ‘Can’t Find My Way Home’ (with typically blues-tinged, lugubrious guitar from Eric Clapton) and two Stevie W tunes – ‘Sir Duke’ and ‘Overjoyed’ – the latter featuring the great man himself on harmonica.

But with albums like these it’s often the vocals cuts that become the key tracks and here there are some stunners. First up there’s Michael McDonald on Sir Van Morrison’s ‘Moondance’. McDonald’s voice is a unique instrument and fits the song perfectly while East’s loose arrangement is in keeping with the spirit of the song. Then there’s Sara Bareilles’ take on one of McDonald’s own songs…. ‘I Can Let Go Now’. She’s a sweet and sensitive singer and she highlights all the song’s plaintive beauty. Nathan’s on the mic for a rendition of the Beatles’ ‘Yesterday’ and with his young son Noah on piano some may find it a tad over sentimental. Very different is the funky homage to some more East sometime collaborators, Daft Punk. ‘Daft Funk’ is just that and lightened by vocoded vocals from Byron “Mr. Talkbox” Chambers.

The set’s variety is heightened by stuff like ‘Moodswing’, ‘Madiba’, ‘SevenNate’ and a look at ‘America The Beautiful’. Like we said up top, East is a busy boy and here he’s put together a busy, bustling album and to underline his status as the busiest man in show business we need to draw your attention to two more new sets on which’s he’s the star man… a new Fourplay collection and a due album with Bob James! Reviews here very soon.