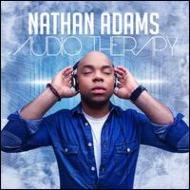 Nathan Adams is a young Londoner who came into soul and dance via gospel. His first proper attempt at making it with secular music was with a funk band called Superwingaz. We’re told that the outfit used to practise near to where top house producer and Tribe label owner Zepherin Saint lived. On day he heard the group going through their stuff and he was impressed – particularly by the lead voice of young Nathan. Saint then put the singer out-front on a number of soulful house recordings – notably ‘Circles’ and ‘Holding On’. From that chance beginning, Nathan Adam’s career started to fly – with gigs in New York Washington, Miami and sell out shows at the dear old Jazz Cafe.

Now with ‘Audio Therapy’, Adams makes his long player debut and the 14 tracker shows versatility and a variety that are rare in someone with a heavy soulful house background. The set leads with the insistent ‘Falling’ – a shifting, rumbling slab of quality soulful house. Produced by no less than Louie Vega, no wonder it’s been selected as the album’s first single. The flavour is similar on ‘Stay Away’, ‘Just Another Love Song’, ‘I Wonder’ and ‘Afraid Of The Dark’ – all classy, housified grooves. If you want something a little more “on” try ‘Sending You My Love’ – complete with a great loping bass line.

However, as we’ve said, versatility’s the order of the day here. So enjoy the changes offered by the subtle laid back ‘Fade Away’, the steady soul groove of ‘Don’t Break My Heart’, the contemporary R&B-tinged ‘Melody’, the ultra gentle ‘Don’t Stop The Rain’, the Latino-flavoured ‘3AM’ and the looser, jazzier ‘Sweetness In My Soul’… complete with a lovely harmonica motif and some sweet harmonies; it’s my favourite (shades of a certain Stevie W). So, yes – lots of pleasing variety with this dose of ‘Audio Therapy’ – but given a unity by Nathan’s sweet, expressive, light and airy vocals. Find out more @ www.triberecordsuk.com