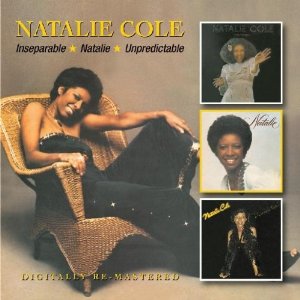 Like some children who were born to famous musical parents, Natalie Cole didn’t toil fruitlessly struggling in the huge shadow cast by her father, jazz singer and pianist, Nat ‘King’ Cole. When she signed a recording deal with Capitol in 1975 – at the age of 25 – she dispelled any doubts about her musical ability by scoring a #1 US hit straight out of the box with the piano-led ‘This Will Be.’ It came from her debut album, ‘Inseparable,’ whose title track was also a Stateside chart topper. That album is now available again from UK reissue experts, BGO, as part of a 2-CD set that includes Cole’s first three Capitol LPs.

Cole didn’t attempt to trade in on her family name and established a declamatory, gospel-influenced style that was very different from her father’s silky smooth jazz delivery. Together with producer/songwriter/husband, Marvin Yancy and co-producer/tunesmith Chuck Jackson, she produced a viable R&B hybrid that blended elements from soul, gospel, pop and funk to good effect and resulted in three hit albums.

1976’s ‘Natalie’ was a solid sophomore set that birthed the hits ‘Sophisticated Lady (She’s A Different Lady)’ and the Latin-esque, disco-tinged ‘Mr Melody’ while 1977’s ‘Unpredictable’ also had a disco leaning and spawned another #1, the sensitive slow ballad ‘I’ve Got Love On My Mind.’ The title track is a solid slab of wild, clavinet-driven, funk with Cole delivering an incendiary vocal performance while the euphoric mirrorball dancer and hit single ‘Party Lights’ reflected the huge commercial success that Natalie Cole experienced in the first two years of her recording career. In terms of hit-making, this collection chronicles the most fertile period in the singer’s output but also shows that Cole’s LPs demonstrated a musical versatility and variety that wasn’t always apparent on her charting singles. An excellent archival collection.