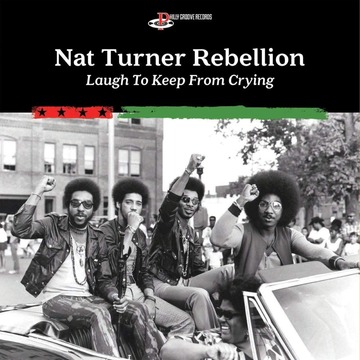 Until now, the cult Philadelphia soul and funk group, Nat Turner Rebellion, have deservedly merited nothing more than a brief footnote in the City of Brotherly Love’s music history. After all, the short-lived quartet – a vocal group comprising Joe Jefferson, Major Harris, Bill Spratley and Ron Harper – released only four singles, all recorded between 1970 and 1972; hardly a cornucopia of riches. But perceptions of the group will undoubtedly change with the unearthing of this lost album,  compiled from fourteen sides they cut for Stan Watson’s Philly Groove label, most of which have never seen the light of day.

Watson, of course, recorded and produced The Delfonics, those seraphic-voiced masters of sweet symphonic soul but Nat Turner Rebellion were more radical in terms of their attitude and sound.  Controversially, they took their name from a Virginia slave who had instigated a slave uprising in the 1820s and fused Black Power politics with a right-on style that drew on The Temptations’ psychedelic soul approach and the funky message grooves of Sly & The Family Stone.  It was a potent brew and probably too much for Watson to handle; he released a clutch of 45s for the band, none of which troubled the R&B charts, but the album they recorded remained in the can. Now, though, all of the group’s recordings for Watson have been exhumed from the archives and prove a rewarding listening experience.

The first thing that strikes you about the album is how good the group’s singles were; especially the Major Harris-fronted ballad, ‘Can’t Go On Livin” and their final 45, 1972’s silky dance groove, ‘Ruby Lee,’ which were both tunes helmed, arranged, and co-written by Norman Harris. They’re lost Philly gems that deserve a bigger audience.  The quartet’s debut single, the Joe Jefferson-written ‘Tribute To A Slave,’ though, is a tougher slice of soul with jazzy inflections that channels The Temptations under the aegis of producer Norman Whitfield.

Of the previously unissued material, the slow, country-inflected storytelling ballad ‘McBride’s Daughter’ is a standout, along with The Delfonics’ sounding ‘Never Too Late and ‘Care,’  plus the psych-soul style message song ‘Love, Peace & Understanding’ and the driving brassy stomper ‘Fruit Of The Land.’

The missing link between The Delfonics and Sly & The Family Stone, perhaps, Nat Turner Rebellion forged a distinctive sound but didn’t get the lucky breaks they deserved. Fortunately, the super-talented Major Harris and Joe Jefferson went on to taste success away from the group; Harris as a solo artist who had a No. 1 single with ‘Love Won’t Let Me Wait’ in 1975 and Jefferson as the songwriter between some of the Spinners’ biggest hits, including ‘Mighty Love’  and ‘Games People Play.’