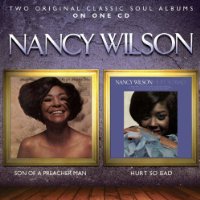 The folks at Soul Music Records have to be applauded for their devotion to the cause in relation to their resuscitation of a massive and largely forgotten chunk of Nancy Wilson’s Capitol Records’ back catalogue. Wilson was such a prolific recording artist that she recorded dozens of LPs during her 21-year tenure with Capitol, the majority of which have been out of print for many years. The above reissues stem from two transitional phases in the Ohio singer’s career.

Back in 1969, Wilson – encouraged by her long time producer, Dave Cavanaugh – attempted to branch out of the jazz/easy/supper club mode and embrace the R&B Zeitgeist. What resulted were two albums in quick succession – ‘Son Of A Preacher Man‘ and ‘Hurt So Bad,’ now reissued together on a single CD. The former album opens with a piquant version of the Dusty Springfield classic, ‘Son Of A Preacher Man,’ which ‘Fancy Miss Nancy’ deconstructs tastefully in her own idiosyncratic way. There’s an earthy, funkier vibe on this album from Wilson’s previously LP releases, as evidenced by the brassy soul groove of ‘Got It Together,’ ‘Mr. Walker, It’s All Over,’ and the bluesy gospel shuffle of ‘Almost Persuaded.’ By contrast, her delectable version of Jimmy Webb’s ‘By The Time I Get To Phoenix’ has an almost celestial beauty about it. Indeed, Wilson found it hard to suppress her natural elegance and sophistication so that even when she does funk, she can’t really free herself from her inhibitions and sounds a little stilted and unconvincing.

A funky vibe continued to infuse ‘Hurt So Bad’ – also released in ’69 – which opens with a brassy cover of Tony Joe White’s Southern swamp ode ‘Willie And Laura Mae Jones.’ There’s also a take on the Ashford-Simpson-penned soul classic ‘You’re All I Need To Get By’ and a misjudged revamp of Blood, Sweat & Tears’ US smash, ‘Spinning Wheel,’ but Wilson’s at her best on silky jazz-inflected numbers, exemplified by a great version of Frankie Valli’s ‘Can’t Take My Eyes Off You,’ and a lush reading of the standard, ‘Do You Know Why,’ which finds the singer back in her comfort zone.

Ten years on from ‘Hurt So Bad,’ Wilson – then 43 – recorded what turned out to be her final album for Capitol, 1980’s ‘Take My Love.’ It, also, took her out of her comfort zone, finding her toying with pumping disco grooves. Long deleted and previously unavailable on CD, ‘Take My Love’ is an album that affirms what a versatile recording artist Nancy Wilson had become at Capitol. True, she was chasing trends (at the urging of her producers) and often trying to hitch a ride on a music band wagon that had long left town but she always brought class to what she sang and recorded even if the material and style was at odds with her true musical personality. ‘Take My Love’s’ propulsive title track is actually quite good – a thumping dance groove propelled by Ndugu Chancler’s taut drums – and as well as some decent studio cuts (featuring a bevy of A-list session players) the final three tracks were recorded live with a full orchestra in front of an invited audience. They really capture the sophisticated essence of Nancy Wilson’s vocal artistry and take her back to her jazz roots at the beginning of her career at the dawn of the ’60s: an inspired end to an album that on paper seemed liked a potentially disastrous collision of styles.

‘Take My Love’ represented the final chapter in Wilson’s two-decade long stint at Capitol and provided a fitting send off for the singer, who was far from finished career-wise: indeed, she later resurfaced on Columbia in the ’80s with a series of fine albums that saw her embracing contemporary soul and R&B and putting her own indelible stamp on them – as she did on everything that she sang…