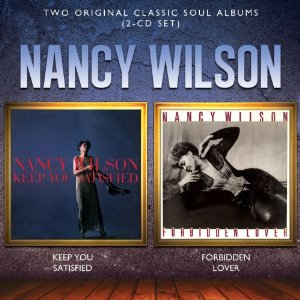 Nancy Wilson possesses one of the best – and most distinctive – voices in popular music though she’s not as well known in the UK as her native USA. The Ohio-born singer rose to fame in the 1960s on Capitol Records as a classy jazz and supper club chanteuse who ventured into R&B territory in the 1970s, ’80s and ’90s and scored a few hits along the way. Soul Music Records have just reissued Wilson’s overlooked early ’70s Capitol albums ‘Can’t Take My Eyes Off You’ and ‘Now I’m A Woman’ – check out Bill Buckley’s review of them both in SJF’s archives – but ‘Keep You Satisfied’ and ‘Forbidden Lover’ date from a later juncture when the ‘song stylist’ had moved to Columbia. 1985’s ‘Keep You Satisfied’ was her third outing for Columbia and was followed by ’87’s ‘Forbidden Lover,’ both of which found the songstress making records in what was then a contemporary urban vein that bridged the gap between soul, R&B and jazz.

On ‘Keep You Satisfied’ Wilson turned to Japanese producer, Kiyoshi Itoh, and his arranger, Masahiko Satoh, whom the singer had worked with on two previous albums (‘I’ll Be A Song’ and ‘Godsend’) for the Interface label. They knew how to bring out the best in Wilson, finding sympathetic (and organic) arrangements plus contemporary material that suited her slightly acerbic, tart delivery and brought her sound up to date without compromising her musical integrity. Though the material includes a cover of George Michael’s pop perennial ‘Careless Whisper,’ there’s nothing crass or cringe-worthy about it; in fact, Wilson makes the song her own, transforming it into mid-tempo soul groove. Other highlights are the slow-building opener, ‘Just To Keep You In My Life,’ which rides on a sinuous groove, plus a fresh take on Rufus and Chaka Khan’s ‘Heaven Bound’ and a beautifully sensuous rendition of Marvin Gaye’s ‘Just To Keep You Satisfied.’

’87’s ‘Forbidden Lover’ – which was the 50th album of Wilson’s career – reunited the ever-elegant songstress with her tried and trusted Japanese production team and brought in then up-and-coming male vocalist, Carl Anderson, on a couple of potent duets – the sultry title track and on the Gene McDaniels’-penned cut, ‘Too Good To Be True.’ As well as featuring uptempo material that would appeal to R&B fans of the day – though thankfully real horns, strings and drums are preferred to their synthetic counterparts – Wilson is able to get her teeth into some expressive storytelling ballads – such as ‘I Was Telling Him About You’ and ‘Puttin’ My Trust.’ There’s even a cinematic cover of Leon Russell’s classic ballad, ‘A Song For You,’ that closes the album. Beginning with dreamy piano arpeggios, it highlights Wilson’s gift for conveying sonic drama via the varied nuances of her unique vocal delivery. For Wilson aficionados who might have missed these titles back in the day, this twofer provides a good opportunity to play catch up.