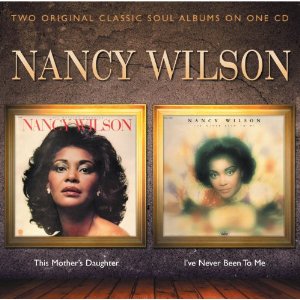 Soulmusic Records continue their reissue programme of Nancy Wilson’s Capitol back catalogue with two quality albums on one CD – 1970’s ‘Can’t Take My Eyes Off You’ and ’71’s ‘Now I’m A Woman’.

Produced by long-time collaborator, David Cavanaugh, ‘Can’t Take My Eyes Off You’ is a typical late 60s Nancy Wilson project. That’s to say, it’s a classy collection of the lady’s versions of pop classics and jazz perennials. Included are covers of an early Burt Bacharach tune, ‘Waiting For Charlie To Come Home’, Brenda Holloway’s ‘You Made Me Feel So Very Happy,’ Leonard Cohen’s drab ‘Suzanne’ and Jim Webb’s ‘Mixed Up Girl’. All are clever, sleek and shiny… but ultimately a little antiseptic. Best of the 10 tracks is an imaginative rendition of Jerry Butler’s ‘A Brand New Me’… and that Philly-created song pointed the way to the follow up LP, ‘Now I’m A Woman’.

It seems that the Capitol execs felt that Ms. Wilson’s recordings were becoming too formularised so in 1971 they decided to team her with up and coming Philly hot shots Kenny Gamble and Leon Huff. The duo, just about to launch Philadelphia International, already enjoyed a reputation as producers who could revitalise sagging careers and they were delighted to be given the opportunity to work with a singer for whom they both had enormous respect. They put together a song portfolio for the album that included songs they’d written especially for Nancy, some they’d used on other artists and a selection of tried and tested pop standards. Highlights on the album include the dramatic Gamble/Huff title track and a jazz tinged version of Bobby Martin’s ‘Let’s Fall In Love All Over’. On the debit side, despite their quality maybe 1971 didn’t need more versions of ‘The Long And Winding Road’, ‘Make It With You’ or ‘Bridge Over Troubled Water.’ The album clearly isn’t as ground–breaking as it should have been. Reasons? Well, maybe Kenny and Leon treated the star with too much respect. They even agreed to make the recording in California. Ms. Wilson declined to come to Philadelphia so despite the presence of some of MFSB, of Thom Bell and Bobby Martin, the album lacked that little bit of Philly magic.

Still, it’s a great collector’s item – made the more worthwhile with the addition of three bonus cuts including Nancy’s version of the Philly chestnut ‘I’m Gonna Make You Love Me’.