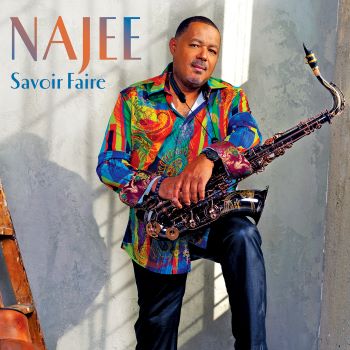 Garlanded sax man NAJEE is in smooth jazz’s Premier League and this new album, our man’s 19th LP as leader, is sure to keep him at the top of the genre’s tree. Interestingly, the concise ten tracker has already started to win favour amongst the sophisticated soul crowd too. Their attention is down to the inclusion of two wonderfully contemporary soul vocals. First, there’s a classy, Latin-tinged ‘Modern Lovers’ which features the ever-dependable Frank McComb. The song was written by Terri Lyne Carrington and Brenda Russell, so factor in Frank and Najee and you know that we’re talking real quality! The second big vocal is a cover of the Michael Henderson song, ‘Valentine Love’ which is best known in it’s Norman Connors version. You might remember that the original vocal was down to Jean Carn. On this new version Alyson Williams takes to the mic putting her own soulful spin on the tune, trading lines with Najee’s mellifluous sax. Sophisticated soul doesn’t get any better than this! Listen up to the scat, jazz ending which references ‘Moody’s Mood For Love’.

‘Modern Lovers’ and ‘Valentine Love’ are two great tracks for sure. But don’t be misled, ‘Savoir Faire’ has a lot more to offer. The opener, ‘Dr Doolittle’, for instance, is an audio example of what the best smooth jazz is all about … melodic, polished and with a definite soul undertow. Ditto ‘Hurricane’, ‘Bounce’ and ‘Bottom To The Top’ (shades there of dear David Sanborn).

The album’s big Latin moment is a cover of Antonio Carlos Jobim’s ‘Happiness (A Felicidade)’. Najee says:  “I had the pleasure of having Robert Herbert produce and co-arrange this track with Brazilian musicians in Rio and Sao Paulo, who live the music everyday. We also brought in Curtis King who is a great long-time session musician and singer. For me, flute and Brazilian music have a natural organic chemistry that is undeniable.”

Best of the album’s slower moments is ‘Isla Hermosa’ which was  co-written with Barry Eastmond who also plays percussion on the track. The most complex outing is the album’s title cut which brings the album to a satisfying conclusion… and, by the way, what a good title for the set. ‘Savoir Faire’ (if my schoolboy French is right) sort of means “knowing what to do”. Here. Najee shows that he knows exactly what to do to deliver classic smooth jazz!