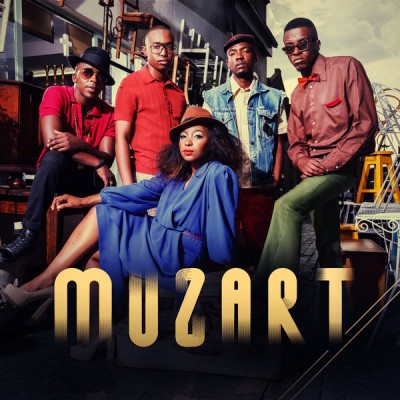 Muzart are a five piece South African band fronted by a great female soul vocalist who goes by the name of Rori. This, their debut eponymous album has been big in South Africa for most of the year while the infectious single ‘Jukebox’ topped the charts there for over three months. UK soul entrepreneur Ralph Tee -who knows a good tune when he hears one – has picked up the rights to the album from the African Soul Candi label and he’s just unleashed it on Europe via his Expansion label. “Unleashed” is a good word too, ‘cos Muzart’s upbeat, lively, optimistic brand of good time soul hits you like a tidal wave.

From the opener, ‘Soundwaves’, through to the closer, a remix of that ‘Jukebox’ single, there’s just no let up. Track after track is energized dance floor fodder mixing classic modern soul sounds with retro vibes, Latin rhythms, Afrobeat and just a dash of soulful house. Picking out a highlight’s a hard job… there’s so much excellence in here. The lead single, ‘Jukebox’ sums up the album’s appeal. Tight and crisp, it’s absolutely infectious with a dainty, catchy piano motif drifting in and out of Rori’s delicious vocal. The more spacey remix takes the tune into soulful house territory but it’s still intoxicating. The soulful house brigade will also love the big opener, ‘Soundwaves’. This one’s a great Latin romp with a hint of Light Of The World’s ‘Bahia’ about it. It would do any samba school proud. Old school soulies, I suggest, should go straight to ‘The Party After’ – a combination of an 80s weekender anthem with that great old Koffee Brown similarly named tune. The most Afro-centered tune is ‘Moemedi’ – hugely rhythmic and as infectious as anything else on the album. Other goodies? Well ‘Oh Yeah’ is a great slice of pop-soul; ‘Morning Glory’ is another pacey dancer…. but in honesty dip in anywhere and you won’t be disappointed… unless, that is, you’re a miserable old curmudgeon. Even the didactic, gospel-flavoured ‘The Great I Am’ will generate a smile and a foot tap or two.

Don’t know too much about Muzart… not even too sure about that name…. but I do know that they’ve crafted one of the year’s most “up” and optimistic soul albums…well done Mr. T for finding it!