MUDDY WATERS; Muddy, Brass And The Blues/Can’t Get No Grindin’ (BGO) 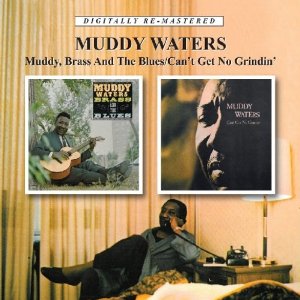 Music writers are quicker than most to hand out accolades and epithets to the artists they write about and amongst the hacks’ most favoured, “esteemed” adjectives are “iconic” and “legendary”. Sadly, all too often they get it wrong. Only a few artists truly merit the honour of “iconic” and/or “legendary” …. but one who sure does is Muddy Waters – a giant of 20th century music. The man, born McKinley Morganfield in Mississippi in 1913, bestrode the blues and his influence was (indeed still is immense). Every home should have lashings of Muddy Waters’ recordings and there’s plenty around from all manner of reissue labels. Most are compilations of his best known tunes and nothing wrong with owning them. But to get a real flavour of an artist and his worth it’s usually better to go to their “bread and butter” recordings – the albums from which the big tunes might have been lifted. Then, you’re more likely to get the full picture.

Over the years reissue label BGO has released a number of Muddy’s albums in “twofer” format and on this new release two of his Chess albums – 1966’s ‘Muddy, Brass And The Blues’ and ’73’s ‘Can’t Get No Grindin” are brought together. Both are real “bread and butter” efforts; they don’t feature any blockbusters or accepted classics but they show the essence of the man. Like all great bluesman, Waters’ delivery was replete with a sense of defeat and melancholy but his art allows him to offer optimism, affirmation and a degree of real hope. Above all his music is sensual and straight from the soul and whether he’s working with a brass ensemble (as on the first LP included here) or with his small band (as on ‘Grindin”) that artistry, sensuality and soulfulness shines through. Highlights abound – ‘Corine, Corina’, ‘Going Back To Memphis’ and ‘Sad Letter’ amongst them and even on seemingly throwaway items like ‘Muddy Waters’ Shuffle’ there’s no sense of filler. Muddy and his band (Pinetop Perkins, James Cotton, Sammy Lawhorn and Pee Wee Madison) give their all all the time. “iconic” and “legendary” indeed!