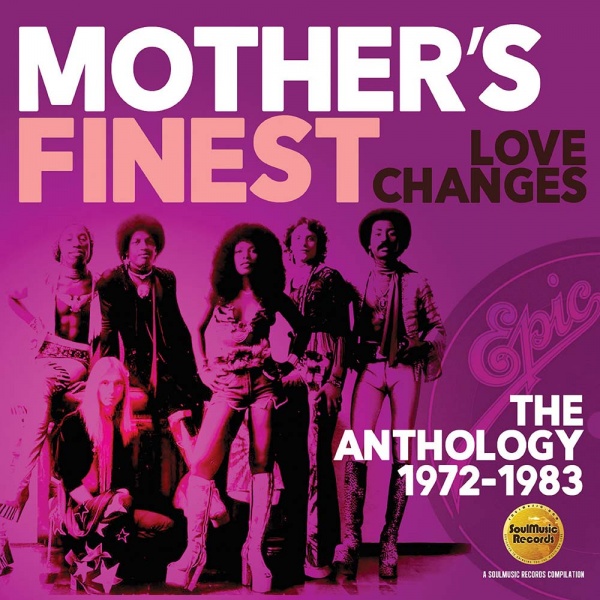 Mother’s Finest weren’t everyone’s proverbial cup of tea with their disregard for racially-based music demarcation lines. Indeed, their propensity for heavy metal guitar riffs confused many people, who thought that African Americans should stick to playing R&B rather than venture into the mostly-all-white preserve of hard rock. But MF, a racially-integrated sextet originally from Georgia, dared to be different. Led by the barnstorming vocals of Joyce Kennedy and Glenn Murdock, they shared stages with The Who, Black Sabbath and AC/DC as well as Parliament/Funkadelic and paved the way for the likes of all-black rock bands like Living Colour and Fishbone. They were pioneers whose true value and impact hasn’t been properly acknowledged in the annals of popular music, though this magnificent, 2-CD Soul Music Records’ compilation should help increase awareness of what they achieved as well as making their music available to a new generation.

Soul music fans who were around in the ’70s will probably recall MF from their R&B-oriented crossover hit, ‘Love Changes,’ in 1978 – it was covered in the ’80s by Meli’sa Morgan and Kashif and later by Mary J. Blige – but it’s probable that the majority of the material contained here passed them by because of its uncompromising rock-leanings. But even those that don’t gravitate towards rock music will find a soulful quality in the majority of MF’s oeuvre (mainly thanks to Joyce Kennedy’s impassioned vocal histrionics) and shouldn’t dismiss this music out of hand.

Those listeners of an R&B bent who are willing to take off their prejudicial blinkers and persevere with this release will hopefully find this 37-song anthology a rewarding experience. Its story begins with the band’s ill-fated RCA tenure in 1972. Their debut single, ‘You Move Me’ (later recorded by Aretha Franklin) b/w ‘Dear Sir And Brother Mann’ are soulful offerings, showing the band’s softer side. They fell out with RCA and a second album they recorded was shelved but this compilation includes five of the cuts from that aborted project, which underline MF’s hard rock credentials. In 1976, the band joined Epic and that’s where their career really gathered momentum. Highlights from this period included the driving, riff-laden ‘Rain,’ plus ‘Fire,’ an explosive gospel-rocker, the more soulful ‘Dontcha Wanna Love Me,’ and a cover of The Miracles’ ‘Mickey’s Monkey,’ which sounds like it’s been re-imagined as a Led Zeppelin song. The classic Skip Scarborough-helmed  ‘Love Changes,’ a succulent moment of mid-tempo mellowness, appears on disc two, alongside more robust material like ‘Hard Rock Lover,’  and the strident anthem, ‘Truth’ll Set You Free’ (which was covered by a reformed Labelle on  their 2008 album, ‘Back To Now’). ‘Secret Service’ has more of a pop/rock feel and showed MF using ’80s sonics while  ‘Victory’ – from the same decade – is an infectious  uptempo tune infused with a soulful vibe. Also noteworthy is an addictive funky R&B groove in the shape of ‘Everybody Needs Somebody.’

Though this retrospective inexplicably omits the essential ’70s track, ‘Niggaz Can’t Sang Rock & Roll,’ it still functions as a very good overview of the band’s twin spells at RCA and Epic Records. The band are still going strong today but I’m sure that even they will admit that this Soul Music Records’ anthology captures them at the peak of their powers and creativity.