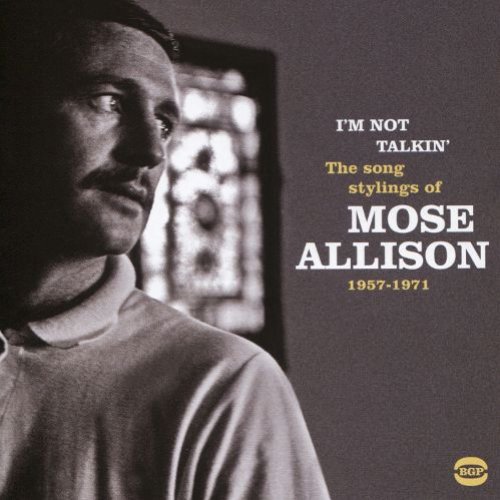 With the saddest of synchronicities, in the week that sees the passing of jazz and blues legend Mose Allison, Ace/BGP issue a retrospective of the first great period of Allison’s lengthy career.

The 24 tracks of ‘I’m Not Talkin’ cover the period between 1957 and 1971 when the Tippo, Mississippi born singer/songwriter was pacted with Prestige, Epic and Atlantic. Dip in anywhere here and you’ll hear a musical one-off. You’ll hear a music that’s witty, sardonic, innovative and, above all else, hugely emotional especially when the songs deal with the tragedies and absurdities of modern life. Little wonder that Mose Allison was so revered by the jazz and blues community of the 60s and why his work was (and indeed remains) so influential. Alison’s style influenced a whole generation of players, especially in the UK where, oddly for the 60s, most of his albums were easily available. Artists like Zoot Money, Van Morrison, Brain Auger, Elvis Costello and, of course, Georgie Fame all acknowledge their huge debt to Mose. Indeed Fame and Morrison (working with the great man himself) cut a whole album in tribute to him.

This new collection contains all of Allison’s early classics and cuts like ‘Parchman Farm’, ‘Baby Please Don’t Go’, ‘Eyesight To The Blind’ and ‘The Seventh Son’ have lost none of their universality despite the passage of over 50 years. ‘Young Man’s Blues’ is also a highlight and interestingly the Who chose this very song to open their acclaimed ‘Live In Leeds’ show which was, of course, recorded for posterity.

Posterity? Well, posterity will record that Mose Allison was a musical one-off… an artist who wrote and recorded with humanity and humour and this collection serves as a fitting tribute to him.