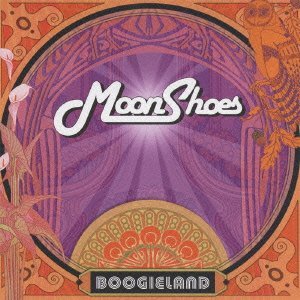 Wow! Here’s a real musical oddity that’s making big waves on the underground dance scene. Moonshoes is the brainchild/creation of French electro music wizard Gilles Paulet who calls the music on this 16 tracker “the new French sound of blue-eyed soul” but it doesn’t sound like blue-eyed soul at all to me. Which I suppose goes to show that one man’s Michael McDonald is another man’s Doobie Brother. But I digress. Paulet goes on to describe himself as “a musical disco monk” and that word “disco” is the clue to the music he’s making here. ‘Boogie Land’ (as the name suggests) is Monsieur Paulet’s homage to the late 70s dance scene. It’s glitter balls and vo-coders a go-go as he tries to electronically conjure up musical images of Earth Wind And Fire, Deodato, Zapp, KC and the Sunshine Band and many more.

The set boasts 16 short tracks and no one single cut stands out. Rather they merge and swirl into each other in a morass of electro effects. That said ‘If You Want To Do It’ did grab my attention – reminding me an awful lot of People’s Choice’s ‘Do It anyway You Wanna’ (memo here to copyright lawyers!) ‘Sunny Dream’ is another interesting cut… just a hint of those down tempo moments in the ‘Shaft’ soundtrack – but, like most of the album, just lacking the passion and soul of the real thing. Like I said up top, this album’s in big demand on the underground dance scene and if you want to try to hear why go to www.souplerecords.com