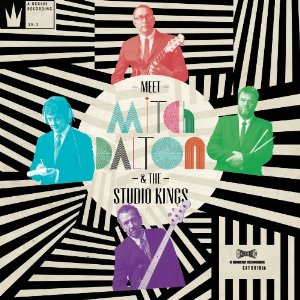 Very few music collectors will know the name Mitch Dalton, but most will have heard him play. Mitch, you see, is one of the UK’s most in-demand session guitarists. He’s played on numerous hit albums and smash singles (everyone from Marc Almond to Robbie Williams); graced countless soundtracks (including the Bond movies); worked on dozens of TV Shows (‘New Tricks’ and ‘Stars In Their Eyes’ amongst them); and contributed to hundreds of commercials and jingles. Jazz, though, has always been his first love and he’s worked with the likes of Herbie Hancock, Wayne Shorter, Abdulah Ibrahim and Melody Gardot. When the opportunity (and time) presents itself Dalton also records his own music – both on his own and with bands Hi-Tek and Hubbard’s Cupboard.

For this new album the guitar man has pulled in three session colleagues to help him deliver his ideas. They are keyboardist David Arch (M. D. on ‘Strictly Come Dancing), bassist Steve Pearce (fresh from the road bands of Van Morrison, Tom Jones, Al Jarreau and Elton John) and drummer Ian Thomas (ex member of Eric Clapton and Bob Dylan’s bands). Between them they concoct a refreshing mix of originals and covers that are always melodic yet groove led.

Their stall is set out with a fabulous little opener – ‘Pure Vanilla’. Deceptively simple and with a Caribbean lilt about it, it’s a warm summer breeze of a tune. There’s more of the same on ‘The F Word’ and the laconic ‘Gone Fishin”. ‘Shuffle Kerfuffle’, ‘U Is Dem Tings’ and ‘Black N Shiny’ are a tad tougher and more complex, while ‘Wes, Wes, Wes’ shows exactly where Mitch is coming from. All those tunes are original compositions, leaving two covers and a hybrid. The covers are ‘As Time Goes By’ and ‘It Never Entered My Head’ – both done in the style of the aforementioned Wes Montgomery (that’s if you ignore the tense opening on the first) and the hybrid is a bright, breezy, rolling variation around the melody of ‘On The Sunny Side Of The Street’. The four guys clearly had a lot of fun working this one up. Ditto the whole album… Mitch and his men knew they weren’t about breaking moulds or pushing envelopes. They just wanted to have fun playing the music they love –the fun’s contagious.