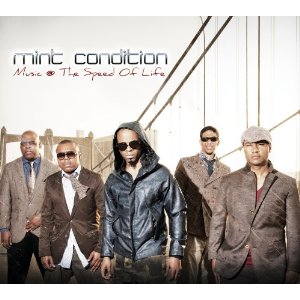 Minneapolis’s Mint Condition are one of the few self-contained soul groups still successfully making music and as you’ve probably worked out this new 11 tracker is their seventh studio album and it’s as varied and eclectic as the first six. It opens with a pair of rocky soul grooves (‘I Can’t Get Away’ and ‘I Want It’) which will remind listeners that the Mints came together in the same musical hot spot that gave Prince to the world. They’re followed by a trio of pleasing ballads that have a feel of Toni, Tony, Tone about them. ‘Caught My Eye’ is quite lovely and what’s so good about it (and the others too) is that they’re not cloyingly sentimental.

Next up is the LP’s odd spot – ‘Bossalude’. This one’s a steel drum-led Latin shuffle whose originality is part of what we come to expect from the Mints. Different again is the next cut -the album’s title tune is a broody rap followed by the crisp beater that is ‘Ease The Pain’. This is one that will get the interest of the modern soul brigade. Hopefully they’ll also enjoy the trio of dramatic, building ballads that round off the collection. Of those ‘Not My Daddy’ is quite superb. It’s a duet between Stokley and Kelly Price and will confound doubters who bemoan the lack of real 2001 soul. There’s soul a plenty on ‘7’ – but don’t expect it to be formulaic… try the anti-drug closer ‘Twenty Years Later’ to understand what I mean!