MINDI ABAIR and the BONESHAKERS; Live In Seattle (Heads Up) 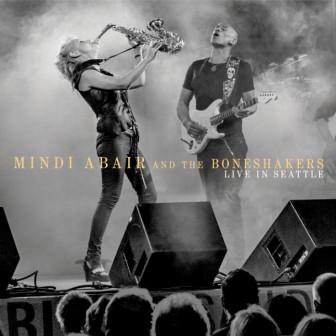 This new live album is sax girl, Mindi Abair’s eighth album as leader and it follows her 2014 acclaimed ‘Wild Heart’ collection. That album, fans will recall, saw the Florida–raised saxophonist take her music into rockier , raunchier territory and after a return to smother sounds with the Summer Horns, Mindi decided to go on the road and seriously develop the raunch she’d reared on ‘Wild Heart’.

To that end she drafted in rockin’ axe man Randy Jacobs and, combining some of her team with his Boneshakers, they got the show on the road. That show was captured for posterity at the Jazz Alley in Seattle in February and after the usual tweaking and buffing it’s now available.

Soul folk and smooth jazz fans will, I fear, find the fare here too rocky. Even the show’s closing tune, a cover of ‘Cold Sweat’ is more heavy metal than pared down funk , despite the best efforts of dear old Sweet Pea Atkinson on vocals. The set’s other big cover is an epic (7 minutes plus) version of ‘Summertime’ but this one’s motivation is Hendrix and as such will unsettle the purists .

The album’s most soulful cut is the Memphis-flavoured ballad ‘I’ll Be Your Home’ . And speaking of Memphis, one of the tunes is an Abair writing collaboration with Stax legend Booker T. Cut in question is ‘Make It Happen’ – a powerhouse sax grind with a flavour of David Sanborn about it. From the perspective of this web site, they’re the best two cuts on offer. Generally this album is more stadium rock than smooth jazz or sweet soul music.