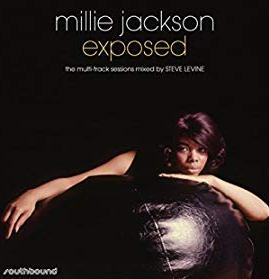 The wonderful Millie Jackson needs no introduction on these pages. She is a soul super star and thankfully most of her best, classic work is easily accessible. New material, though , is rare so to satisfy Jackson fans in particular and soul lovers in general, Ace Records embarked on an ambitious project a year or so back…. they brought in top UK producer and mixer, Steve Levine to reimagine 12 of Ms J’s best.

Levine has a remarkable track record. He started off in the punk era but went on to work with the Beach Boys and Culture Club. Those gigs secured his reputation and since then he’s worked with plenty more big names . He became chairman of the Music Producers Guild and has produced and presented all kinds of music shows for the BBC. A Brit and Grammy award winner, he works out of a studio in Liverpool and it’s there that he worked on the Millie Jackson project.

Essentially Ace, who have the license to work Spring product, digitalised Millie Jackson’s original multi-track analogue recordings and charged Levine to come up with something a little different but which retained the essence of the woman!

He choose 12 tracks – including ‘My Man A Sweet Man’, ‘If Loving You Is Wrong ‘and the Isaac Hayes duet, ‘Sweet Music, Soft Lights And You’ – and his efforts have just been released on CD (and for those who like new-fangled technology, on a seven track vinyl LP). It’s important to note that these new mixes aren’t what we night call “contemporary mixes” where mixers and producers add new elements to the original recording. Here Levine only uses original material – tracks recorded at the original sessions. And come on … who would meddle with stuff laid down at Muscle Shoals or “sweeteners” recorded by people like David Van DePitte at Detroit?

The result is music that isn’t better than the original – just different… maybe a wee bit sharper, maybe a wee bit edgier; let’s call it a new perspective. The Ace people tell us that the album’s been called ‘Exposed’ because these new mixes “open up” the tracks. Make up your own minds! ‘Exposed’ is out now.