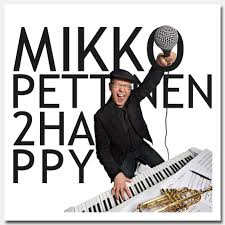 Mikko Pettinen hails from Finland, but he speaks the universal language of soul, jazz and funk. He began his musical odyssey as a jazz trumpet player but he also plays keyboards, composes, arranges, produces and sings. He has four jazz albums under his belt (three recorded with the quartet MP4 and one with Finnish guitarist Teemu Viinikainen) and he’s also recorded with the Umo Jazz Orchestra. Interestingly Mikko’s also worked with UK soul man Tony Momrelle who’s latest EP we recently covered in our news pages. Maybe it was working with vocalist Tony that inspired Mikko to record ‘2 Happy’, his own solo, soul and funk vocal album. That said, the 13 tracker isn’t your traditional, classic soul and funk set. The soul and the funk’s in there for sure – but they’re given a Nordic twist while Mikko’s other admitted, non-soul influences – Billy Joel, Steely Dan, and The Beatles shine through strongly.

With its crunching synth lines, ‘Stuck On That’ is the LP’s outstanding track. It has the feel of ‘Superstition’ era Stevie Wonder and it’s clear that Mikko and his six piece backing band are having a ball. Elsewhere ‘Dim The Lights’ and ‘Open Pages’ owe much to Steely Dan though vocally Mikko does a good Billy Joel. Indeed ‘Making My Way’ could be an old Billy Joel outtake. ‘Moment Of Funk’ and ‘Climate Change’ are big slabs of Euro style funk – a touch too polite maybe. That last even features a rap from Redrama. Of the ballads, ‘Take Me As I Am’ is the prettiest– gentle and pop-inflected.

There’s a lot going on ‘2 Happy’… maybe just too much. Tighter production might have meant more overall impact. That said, it’s never less than an interesting listen. Find out more @ www.mikkopettinen.com