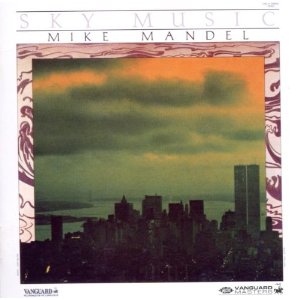 Keyboardist Mike Mandel hailed from a rural community – Yakama in Washington. Blind from the age of 9, he found a release in music – forming a group in 1960 with his childhood friend, Larry Coryell, with whom he was later to play with in the band Eleventh Hour. By the 70s, however, Mike was working in New York; an in-demand session player, he came to the attention of A&R man Danny Weiss who took him to the famed Vanguard Studio to record this 7 tracker in 1978… and, over the years, ‘Sky Music’ has become much sought after by the jazz fusion collectors. It’s easy to hear why. The repertoire is a pleasing mix of originals and covers but all are melodic and easily accessible and with sidemen like David Sanborn, George Young and Steve Khan the playing is never bland.

The two big tunes, I guess, are the covers – Billy Joel’s ‘Just The Way You Are’ and Steely Dan’s ‘Peg’. The former is treated respectfully while the latter really rocks –especially when Sanborn’s sax kicks in. The original album version ran to just over three minutes – it’s included, of course, but here you can enjoy an extended five minute treatment as a bonus. Best of the original tunes is the jumping ‘Jupiter Fingers’ which was to achieve fame as a voice over bed for Radio 1 DJs. Elsewhere ‘Pyramids’ and ‘Another Kind Of Spring’ are pleasing – precursors of smooth jazz, so I guess it’s no coincidence that the impetus for this first time reissue has come from Jazz FM’s Steve Quirk, who also supplies sleeve notes.

Mandel recorded a second solo set – ‘Utopia Parkway’ – then went on to work with The Players Association. Nowadays he’s known for his TV theme tunes –notably The Ellen DeGeneres show, but, as Steve Quirk points out in the notes, ‘Sky Music’ remains his best solo work.