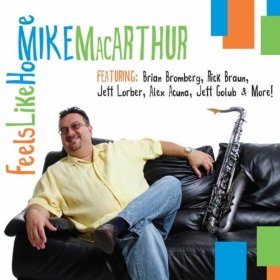 Florida-based Mike MacArthur is a highly respected American sax man who makes a good living from sessions and playing in the road bands of people like Roger Waters, Peter White, Jeff Kashiwa and Frank Valli. Before those gigs he was a long serving member of Maynard Ferguson’s band – honing his jazz skills on countless worldwide tours. MacArthur’s already released four albums… low key affairs chiefly; for this album though, his fifth set as leader, he comes out firing – surrounding himself with some of the very best players on the circuit and wisely mixing the repertoire between tried and tested jazz standards and quality originals.

Of those originals ‘Around The Corner’ is the immediate grabber… big and bold it rides a catchy soul groove. The album’s title cut is another MacArthur tune. It’s the long player’s main laid-back moment – classic smooth jazz with some wonderful crystalline piano from Ron Reinhardt.

For his covers Mike’s gone with a bunch of classics that shows he’s not afraid to take on the genre’s heavy hitters… and there’s none heavier than Duke Ellington. Here the sax man tackles the iconic ‘In A Sentimental Mood’ and strips it right down. This version is a two hander – just MacArthur’s sax and Brian Bromberg’s sympathetic acoustic bass. Bromberg’s bass is one of this album’s main features. It leads on the take on Miles Davis’ ‘Jean Pierre’ and is rock steady on covers of Horace Silver’s ‘Filthy McNasty’, Sonny Rollin’s ‘Blue Seven’ and Joe Zawinul’s ‘Birdland’ – here slowed down just a tad… and the more interesting for that.

The cut currently getting most of the attention at the moment (certainly from the US radio stations) is ‘Sanctified’… a meandering six minute amalgam of blues and gospel. It’s the album’s only vocal inclusion and features the church-reared voices of Alva Copland and Janelle Sadler who bring the thing home in the best testifying way.

Other featured guests on ‘Feel Like Home’ include Rick Braun, Jeff Golub, Alex Acuna, Jeff Lorber and tightest of tight drummers Frank “Third” Richardson … a cast list guaranteed to tempt smooth jazz devotees to investigate .. and they can do so @ www.mikemacarthur.com