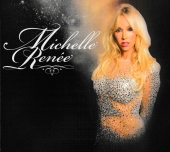 This eponymous 11 tracker is the debut set from US singer/songwriter, Michelle Renee. Hailing from upstate New York, she began singing in a family group; then when her family relocated to Germany, she performed there, supporting her musical mother. Back in the USA she embarked on her own solo career but was soon recruited by the SOS Band, working with them during their tenure with CBS Records.

In places, this solo debut shows that she’s learned from her time with the SOS Band because there’s a number of decent soul cuts here. ‘Ooh La Love’ is the most obvious link to her former paymasters. This one’s a bubbly dancer with a great popping bass line and some bright brass features that recall Bluey’s arrangements for the Incognito brass section. It really is quite infectious. The opener, ‘Heaven’ is another good tune – a solid mid-tempo groove perfectly suited to Michelle’s mature, aching vocals. Soul-wise, ‘Gypsy Girl’ is another winner. Stately and insistent, it’s a real builder.

Sadly with one notable exception (which we’ll come back to later), that’s more or less it for proper soul. The rest of the album is a mix of sweet pop balladry (like ‘Say’), a Latino-flavoured dancer (‘Time For Kama’) and one AOR tune – ‘Mamacita’ – think Fleetwood Mac meets Toto with a garnish of Gloria Estefan!

Now for that exception… a brave cover of John Legend’s ‘Ordinary People’. Always a great tune, Ms Renée does a great job. She turns it onto a lovely, slow shuffle and the song really does allow her to make the most of that lovely world-weary soul voice. Yes, with the right material we could (hopefully) be hearing a lot more of Michelle Renée in the future.