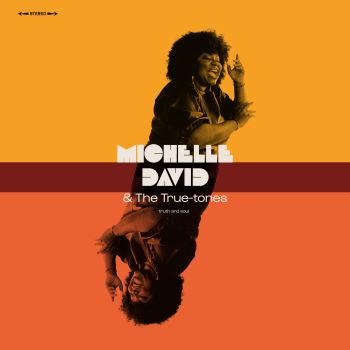 MICHELLE DAVID is a one-time US gospel singer who now works out of the Netherlands. Michelle already has five albums to her name  credited to “Michelle David and the Gospel Sessions”. Right now she’s, sadly,  not that well known outside of the Netherlands where she’s made quite a name for herself – an Edsion nomination (the Dutch Grammy!) and numerous TV appearances. Over here, serious soul tastemakers have indeed picked up on her. Craig Charles regularly plays out her music while connoisseurs soul label One World have licensed some of her tracks for vinyl release.

Ms David’s status is sure to change with the release of this new album for which she’s  morphed her band  from the “Gospel Sessions” to the “True Tones”. We’re guessing the move is to broaden her appeal and to get away from what is essentially seen as a niche market. A good move, for sure, but despite the name change, the sound’s the same – big, bold, organic soul music with a powerful gospel undertow.

The 11 tracker offers plenty of variety with the lead single channelling an exotic vibe… a percussive ‘You Can Make It’. It’s a duet with Cote D’Ivoire Grammy winner Dobet Gnahoré. There’s more exotica on ‘Sahara’ while the LP’s second duet, ‘Better’ (with Brazilian/Dutch singer Lílian Vieira) is pacey with a subtle Latin undertow (lyrics partly in Portuguese too!)

You’ll find lashings of what we might call more traditional soul flavours on the album too. ‘Trust’, for instance, is a lovely, heartfelt, mid-tempo soul groove – light and lovely and an album highlight. ‘Wait’ is a sparse but fierce ballad. The dramatic ‘Yes I Know’ harks back to Ms David’s gospel routes while the album ends with a joyous ‘Yeah, Yeah, Yeah’ –  surely a homage to Northern Soul. Rough and tough, this would’ve gone down a bomb at the dear old Casino! No wonder the aforementioned Craig Charles has latched on this. Plagiarism lawyer alert, however, the tune owes more than a little to the Spencer Davis Group’s ‘Keep On Runnin’’ (think that one was written by Jackie Edwards).

All that legal stuff really doesn’t matter to music lovers; it’s what’s in the grooves that counts and there’s plenty to please in the grooves of ‘Truth And Soul’ . If you like the Sharon Jones’ sound, you’ll love this one! The album’s out now and Michelle and the gang officially launch the album at London’s Jazz Café this Friday, May 6th.