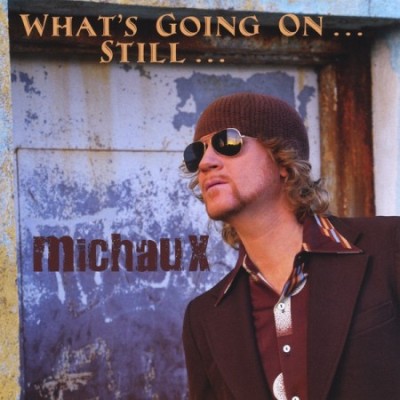 MichauX (his spelling) hails from Austin, Texas where by day he’s a social worker – interacting with young offenders. Musically, despite his comparative youth, he sees himself as a 70’s soul man and he’s proud to name Curtis Mayfield, Leroy Hutson, Donny Hathaway and Marvin Gaye as his heroes and influences. And it’s Gaye’s masterpiece that he’s chosen to revisit for this – his second solo LP. Obviously this begs the question “why?”. Well, MichauX offers a very simple answer, “to say to Marvin, you are not forgotten and what you said 39 years ago still rings true today“… and hey, you can’t argue with the logic. People do need to take stock of what’s going on and here – by delivering five of the key songs from the Gaye album, MichauX proffers a prompt for us to do just that.

MichauX, though, hasn’t gone for a simple recreation. Not for him a karaoke version. Rather, he’s stripped the songs down and with the sparsest of instrumentation he allows the melodies and sentiments do the work. Interestingly too, he tackles the songs in a different order – starting with ‘God Is Love’ which segues beautifully into ‘Mercy, Mercy Me’. The epic title tune is track four and MichauX treats it with respect but gives it a different colouring with his soft, caressing tenor. It’s a delight. The two other songs he’s chosen are ‘Inner City Blues’ and ‘What’s Happening Brother’ which tails off into an album closing jam which he’s called ‘Do You Want To Know’.

Throughout, the music is laid back and laconic, loose and organic and it really does make you listen with fresh ears. Interestingly, MichauX and his musicians decamped to England (Leeds’ Formby Studios to be precise) for the recording. There they used vintage instruments and analog equipment and it shows. It adds to the album’s authenticity and enhances the clear message that this is a work of love – something the world is still sorely in need of. For more information go to www.michauxmusic.com