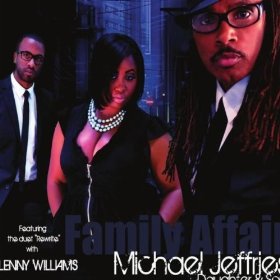 Michael Jeffries was born in Memphis, but his family relocated to Oakland in 1962 and young Michael was soon immersed in the Bay Area music scene. He worked in a band called Two Things In One before he was recruited by local heroes Tower Of Power to replace Edward McGee as lead singer. Mike stayed with TOP till the mid 80s recording four albums with them. A solo career yielded occasional successes – most notably a funky dance item called ‘Razzle Dazzle’ which made waves 20 odd years ago.

For this, his latest recording, Michael is working with his daughter Anikol and son Mike J … hence the album’s title (and, no, there’s no cover of Sly Stone’s song here). The three share lead responsibilities and come up with superb harmony support throughout – instinctive probably, and on one tune – the dramatic balled, ‘Rewrite’, the threesome are joined by another ex Tower Of Power stalwart, Lenny Williams. The four work well together Jeffries and Williams clearly hit it off. The tempo of the cut is typical of the album… if you like heartfelt, soulful ballads, there’s plenty here. Best, maybe, is ‘Make Sum’ whose sophistication will recall the golden days of Philadelphia… no wonder Ralph Tee is championing it on his radio shows. The sting-led ‘Plans’ is another sweet, quiet storm moment while the deeper ‘Mother’s Love’ might convince doubters that real soul is still being created. Lovely piano on that one too.

The crispest beater is ‘Journey On A Butterfly’. Its beats, though, are sedate but the song’s theme is interesting. ‘Can’t You Feel It’ might appeal to steppers too. It’s a good, solid modern soul cut and indeed that’s the best way to describe the album. Michael Jeffries, here, uses his God-given talents and career experiences to craft some “proper” modern soul – free of gimmicks and clichés and how pleasing to see (and hear) that he’s passing on his wonderful craft to his children. For more information on this album go to www.mjmartist.net