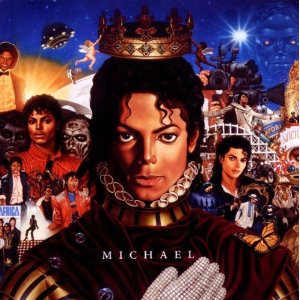 In death –as in life- controversy stalks Michael Jackson. This album is the erstwhile King Of Pop’s ninth posthumous release – but it’s being proudly billed as the only one to consist of new material, and therein lies the first bone of contention. Eagle-eyed Jackson-ologists reveal that ‘Much Too Soon’ dates from the ‘Thriller’ sessions while ‘Hollywood Tonight’ is a tad newer – from around the time of ‘Invincible’… and some surmise that a lot of the rest has been cobbled together from the sweepings of numerous old sessions. More contentious, however, is the claim by some of Jackson’s family (his mother, no less) that some of the vocals aren’t his! Sony, naturally, refute the dastardly allegation though on the sleeve they and Jacko’s “estate” do print a rider that the “album was conceived and inspired by the King Of Pop, Michael Jackson”.

Take all that any way you want – much more important, I think, is to ask the question is the 10 tracker any good? The answer will, of course, depend on your opinion of Michael Jackson. His legions of fans will love it; his detractors will find loads of ammunition to fuel their criticism. In truth – within the parameters of modern R&B and pop/soul – the album’s not that bad. Certainly the music’s nowhere near the quality and consistency of primetime Jacko material but neither is it as poor as some of the more posturing pundits would have us believe.

Best cut on the set is the most understated one – ‘(I Like) The Way You Love Me’. Written by Michael and co-produced with Theron Feemster, the simple mid-tempo swayer has all the qualities that made Michael what he became . His voice is in fine form and the melody is a beaut… a real ear worm! Also effective because of their simplicity are the aforementioned ‘Much Too Soon’ (lovely mournful harmonica here courtesy of Tommy Morgan) and ‘Best Of Joy’. For the rest, well stuff like ‘Monster’ (feat. 50 Cent) and the also aforementioned Teddy Riley-helmed ‘Hollywood Tonight’ suffer from trying too hard to ape previous MJ biggies – the former feeling like ‘Thriller’ and the latter with the beat structure of ‘Billie Jean’. The single, ‘Hold My Hand’ is more Akon than Jackson; ‘Keep You Head Up’ is a soppy slice of cod-inspiration; ‘(I Can’t Make It) Another Day’ is unfocused; while the best bit of ‘Behind The Mask’ is the sax work from Mike Philips. That leaves ‘Breaking News’ which chronicles the pain of being Michael Jackson. The fans will sympathise; the knockers will mock… ditto their attitudes to the album.