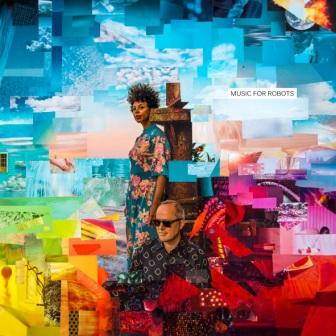 Soul fans who may have been on Mars for a year or so probably won’t have heard of new band MF Robots. Every other soul head down here on Planet Earth, though, will know plenty about them because since January 2017, they’ve peppered us with four fab singles (alongside tasty remixes), played live to enthusiastic audiences and enjoyed a high media profile.

By now everyone, we’re sure, knows that MF Robots are duo – ex Brand New Heavy, Jan Kincaid and sometime Heavy/sometime solo performer/sometime top sessioneer, Dawn Joseph. They quit the comfortable BNH format in 2015 to strike out on their own to create their own brand of “fun” soul music…. music that has energy and positivity; music that works against the negativity that so many face in the everyday grind; music that is a far cry from the generic, formulaic, “safe” music that seems the contemporary norm; music for people – not music for robots. Hence the duo’s ironic moniker!

MF Robot’s first four singles ticked all the boxes above. ‘The Night Is Calling’ got the ball rolling and the tune quickly became a turntable hit with commentators drawing comparison to Jacko’s ‘Don’t Stop Till You Get Enough’. ‘Come On With The Good Thing’, ‘Believe In Love’ and ‘Show Me Love’ kept the momentum going. The seven minutes of ‘Believe In Love’ was particularly well-received – a gorgeous, rolling Wonder-esque groove that Ms Joseph delivers with an impassioned Gospel-reared vocal.

Those singles still shine on the 14 track album but there are plenty more good time goodies. ‘Whatcha Sayin” opens proceedings and though the theme is leaving and saying goodbye, like the rest of the LP, it’s hugely optimistic. ‘Woo’ is, I’m guessing, Jan and Dawn’s homage to where it all began… the 60s. This is a proper energized, solid stomper topped with a gritty Junior Walker inspired sax solo. ‘Scary Monsters’ is another highlight and despite its title it’s another big “up” moment with a delicious melody. Even the album’s mellower moments (‘Love To Last’ and ‘The Greatest (Me And You)’ (Jan gets to sing on this one, by the way) keep well away from the dreary and the melancholy and dovetail beautifully with the long player’s abiding positivity, optimism and humanity… ‘Music For Robots’ is definitely NOT music for robots!

Learn more about the band and the album via our MF Robots Q&A in out interview section.