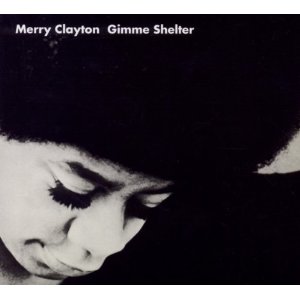 Informed and well-read rock and pop fans should be well acquainted with Merry Clayton, whose passionate, soul-stirring, gospel-raised voice supplied backing vocals for the likes of the Rolling Stones (that’s Merry’s voice featured opposite Mick Jagger’s on the classic ‘Gimme Shelter’ from the group’s 1969 album ‘Let It Bleed’), Neil Young, The Who, Lynyrd Skynyrd, Tom Jones, Tori Amos and many more. Soul aficionados, of course, know Merry (a preacher’s daughter who gets her festive name from her December 25th birthday) from her work as a Raelet with Ray Charles, her stint as co-founder of the cult group Sisters Love and not forgetting her occasional and criminally overlooked solo work. Her first two albums – recorded for producer Lou Adler’s Ode label in 1970 and ’71 respectively – have just been reissued and certainly warrant investigation by soul buffs who might not be cognisant of the singer’s work.

As debuts go, ‘Gimme Shelter‘ was a potent one, its keystone being the Louisiana-born singer’s soulful re-tooling of the titular Stones’ song that brought her to many people’s attention in the first place. The song was a US pop hit for Clayton – whose athletic voice sounds like an amalgam of Mavis Staples’ grit and Thelma Houston’s fiery gospel delivery – but failed to ignite the R&B charts. That’s understandable, perhaps, given that its material is dominated by rock/pop tunes by James Taylor, Paul Simon, Van Morrison and The Doors. Stylistically, it’s a precursor to the kind of soul-rock hybrid that Betty Lavette is doing right now. Other highlights on the set include ‘Country Road,’ the funky ‘You’ve Been Acting Strange’ (penned by Billy Preston) and a churchy reconfiguration of Simon and Garfunkel’s ‘Bridge Over Troubled Water.’ Also listen out for a powerful deep soul ballad called ‘I Ain’t Gonna Worry My Life Away,’ featuring some deeply emotive, call-and-response vocals straight from the church.

Clayton’s eponymous sophomore album ploughs a similar stylistic furrow as her debut, melding fervent gospel cadences with rock and pop material penned by fellow Ode artist Carole King – who also plays keyboards – Neil Young (an incendiary version of his ‘Southern Man’), James Taylor (‘Steamroller’), and Leon Russell (‘A Song For You’). Added to the mix to up the soul quotient are songs by Bill Withers, Leon Ware and Billy Preston – the latter’s ‘Sho’ Nuff’ is one of the set’s standouts, along with the Carole King-scribed ‘After All This Time,’ which was a Top 50 Stateside R&B chart entry for the chanteuse at the end of 1971. Although Clayton’s work hasn’t garnered the acclaim her prodigious talent unquestionably deserves, the reissue of these two albums might bring some belated praise and recognition her way. And about time too!