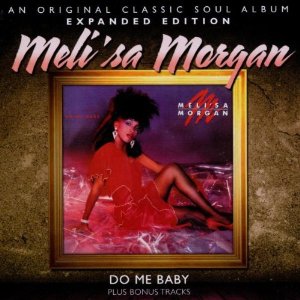 For UK soul fans, the killer cut on the album was unequivocally the infectious ‘Fool’s Paradise,’ a propulsive dance groove co-written and produced by Morgan with her writing partner, pianist, Lesette Wilson. In fact, Morgan and Wilson are responsible for the lion’s share of the album, including the passionate beat ballads, ‘Do You Still Love Me,’ and ‘Now Or Never,’ both of which showcase the magnificence of Meli’sa Morgan’s extraordinary voice. The duo could also deliver some feisty femme funk, as exemplified by the driving ‘I’ll Give It When You Want It.’ Though the Paul Laurence-produced closer, ‘Lies,’ almost plagiarised the groove section of Michael Jackson’s ‘Don’t Stop Til You Get Enough,’ ‘Do Me Baby’ was a pretty impressive debut.

This expanded reissue includes the non-album B-side, ‘Deeper Love’ (in both remix and dub formats), plus several single mixes of album tracks, including the coveted ‘Paradise Mix’ of the sensational ‘Fool’s Paradise’ and an instrumental version of ‘Do Me Baby.’ The liner notes, with contributions from Morgan and Paul Laurence, are well worth a read too.