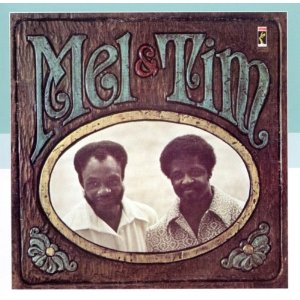 Like many classic soul men, cousins Mel (Hardin) and Tim (McPherson) were reared in gospel music, but after their obligatory stints with Uncle Sam, they decided to take the secular musical path and signed to Gene Chandler’s fledgling Bamboo label. Here they were to score with the infectious ‘Backfield In Motion’ before Chandler and his label went bust! By 1972 the duo were back home – down South, where they were signed to Stax, which, at that time, was attempting to build a roster to rival Motown. Mel and Tim were duly dispatched to Muscle Shoals, where they recorded the remarkable ‘Starting All Over Again’. The single became one of Stax’s best sellers and though the similarly titled album wasn’t as successful, the label sent them back to work with Barry Beckett and Roger Hawkins on a second LP – and it’s that eponymous 10 tracker that’s just been reissued by Ace/BGP as part of their Funk and Jazz Classics series.

The album begins with an effort to recreate the sound of ‘Starting All Over Again’. ‘Keep The Faith’ was written by Mark James of ‘Suspicious Minds’ fame and here he creates a warm, reflective song on which Mel and Tim excel… no wonder the cut has been much sought after in recent years. It’s not quite a ballad but it offers a deep, balladic stillness and indeed it’s the album’s ballads are the set’s outstanding cuts with ‘I Would Still Be There’ and ‘It’s Those Little Things That Count’ really hitting the spot. Best of the up-tempo numbers is the busy and bristling closer ‘Forever And A Day’ while a version of Allen Toussaint’s ‘Yes We Can’ captures the loose syncopated feel of New Orleans despite being recorded in Muscle Shoals. That one – and the aforementioned ‘Keep The Faith’ are the only non-Philip Mitchell penned songs on the LP , so it goes without saying  that we’re talking quality music throughout. Despite that, the album sold poorly and the two singles from the set made no impact. With Stax soon in demise, Mel and Tim fell off the radar though we have this lovely album to remind us of what they were capable of.

For details of other releases in BGP’s Funk and Jazz Classic series, go to our news pages.