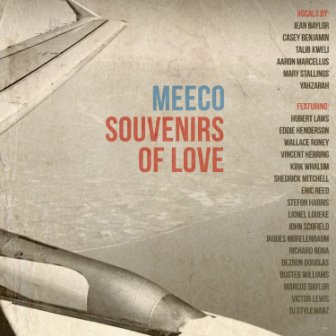 Meeco is the musical alter ego of Paris-based pianist, composer and producer Michael Maier. ‘Souvenirs Of Love’ is his fourth album and, with the assistance of a guest list of Cecil B De Mille proportions, the menu offers eleven tracks which mix jazz, hip-hop and soul.

So let’s start with the soul tunes…. of which there are plenty. The clear highlight is a great Quiet Storm moment called ‘Every Day’. This is a sensual vocal duet between Aaron Marcellus and Jean Baylor (who some of you will remember as one half of Zhane). The pair blend effortlessly and the lazy, languid feeling is enhanced by Kirk Whalum’s weaving sax lines. Ms Baylor’s there too on the more melancholic ‘If Only I Knew’ which features some lovely muted horn from Eddie Henderson and pleasing old school Hammond courtesy of Shedrick Mitchell. ‘Can’t Get You Out Of My Mind’ is another soulful ballad and another duet. On this one the vocalists are Aaron Marcellus and Yahzarah (Dana Nicole Williams) – a long time Erykah Badu back-up singer. You can feel that Badu influence on ‘Make My Dreams Come True’ – a meandering neo-soul affair with Yahzarah up front again.

Elsewhere, the album’s title cut is a spoken word piece with an atmospheric, cinematic backdrop and that cinematic feel is extended on ‘Paris By Night’ on which Ms Baylor shows she can “do jazz” as effortlessly as she can “do soul”…. very Carmen Lundy, this one and some great vibes too from Stefon Harris while Buster Williams’ bass ties it all down. ‘Farewell’ –led by Hubert Laws’ flute – is the instrumental, ballad set piece while ‘Your Eyes’ and ‘Times Have Changed’ allow Meeco to experiment. The former features some strange vocoder effects while the latter features rapper Talib Kweli.

The eleven track album is enhanced by five “bonus” cuts…. three are instrumental versions of ‘Paris At Night’, ‘Your Eyes’ and ‘Times Have Changed’; two are Aiko Rohd remixes (‘If Only I Knew’ and ‘Every Day’) and of the two, the tweak of the aforementioned ‘If Only I Knew’ is excellent. Sophisticated modern soulsters could do worse than investigate.