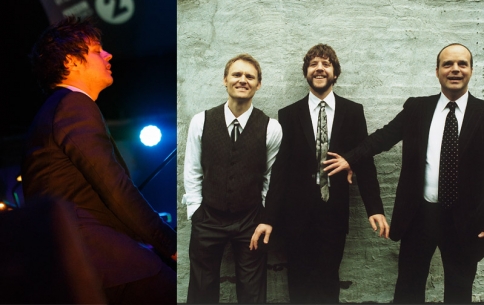 Introduced by a gushing  Jamie Cullum, who described them as one of his favourite all-time bands, the long-running US  trio comprising keyboardist John Medeski, bassist Chris Wood and drummer Billy Martin, spent the first 30 minutes or so of their set illustrating why their intuitive ensemble work and free-form jazz-funk jams have won them a legion of admirers.  Medeski showed his versatility by alternating between acoustic piano, Hammond B-3 organ, Wurlitzer piano and an otherworldly-sounding  Mellotron-style instrument. He was a veritable fount of wild soloing and endless gospel-infused riffs that rode on Chris Wood and Billy Martin’s fluid but lock-tight grooves. Jamie Cullum joined the band as a vocalist for the second half of the show, where they began with an unusual version of Nat King Cole’s ‘Nature Boy’ where MM&W provided  ghostly and ethereal accompaniment. Then came a driving take on Duke Ellington’s ‘Caravan’ followed by a funky retooling of Elvis Presley’s 1969 hit ‘Suspicious Minds.’ The latter was more orthodox in its arrangement and didn’t work quite as well as the previous cuts but Cullum and his new friends were clearly enjoying themselves. The four then embarked on a jazzy, funked-up take on The Neptunes’  Pharrell Williams-penned tune, ‘Frontin’,’ before performing a rousing encore in the shape of Jimi Hendrix’s ‘Crosstown Traffic. Wild.