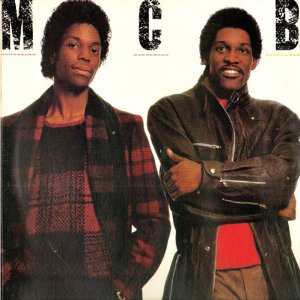 Despite the cover picture of this, their solitary, self-titled album from 1983 (which depicts two members), Washington DC-based MCB was, in fact, a trio (the group’s name comprised the initials of bassist/vocalist Aaron Mills, keyboardist Thomas ‘T.C.’ Campbell – who apparently failed to attend the front cover photo shoot and preferred a low-key role in the trio – and lead vocalist/trombonist, Jeryl Bright). Mills had played with Donald Byrd and then joined Larry Blackmon’s Cameo, but when Blackmon trimmed Cameo down from a large aggregation to a quartet at the beginning of the ’80s, he joined forces with Campbell and Bright.

Signed to Epic, MCB didn’t ignite the charts in their native USA but surprisingly, perhaps – at least to the group – their LP stimulated a lot on interest in the UK (in fact, entrepreneur and music mogul, Morgan Khan, licensed their track ‘I’m The One, You’re The One’ for one of the albums in his popular and successful ‘Streetsounds’ series). Now digitally remastered, this lost gem is back in circulation again thanks to the discerning folks at Funky Town Grooves.

Unlike quite a few ’80s R&B albums, ‘MCB’ has stood the test of time – certainly, one thing in its favour is the absence of trashcan-lid-sounding drum machines and tinny synth sounds. Instead, the grooves and rhythm tracks are organic yet crisp and tight, supplemented by some great brass parts delivered by the famous Phenix Horns and saxophonist, Don Myrick. There are plenty of highlights in the dance department – for instance, the funky groove that is ‘Time Is Right,’ the propulsive ‘Do It Up,’ and the sinewy opener, ‘Can’t Fight The Feeling’ – but there are also some strong, really soulful cuts. ‘Bring It Back (To The Music),’ is a sultry mid-tempo groove, and former Brainstorm singer, Belita Woods, duets with Mills on the dramatic and passionate slow ballad, ‘Close To You.’ The killer cut, though, is the song that originally got MCB attention in the UK, ‘I’m The One, You’re The One.’ It’s a classy dancer with an infectious chorus and slinky bass line. Well worth tracking down.