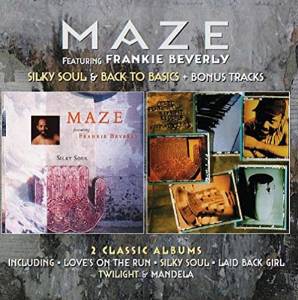 It was way back in the ’90s that we were last treated to a new album from Frankie Beverly and Maze. Since then there’s been a wonderful tribute set and a number of “best of” albums but nothing brand new from the band. While we wait expectantly here’s another “best of” – a 2CD 24 tracker that’s the latest in Music Club’s “essential” series.

Everything that you’d expect is here – ‘Back In Stride’, ‘Before I Let Go’, ‘Golden Time Of Day’, ‘Running Away’ et al. That “al” of course includes Frankie’s “albatross’ – ‘Joy And Pain’. Here we get two versions – a 2004 digitally remastered version of the original and an almost ten minute live recording from a 1981 New Orleans concert. My favourite version of the song is a 1989 remix featuring Kurtis Blow… it’s a tad faster than the original but the beats are tighter than tight – totally reinforcing that insidious little riff. Sadly, not included here – but worth looking for. One favourite that is included here is ’89s ‘Silky Soul’ – Frankie’s heartfelt and absolutely authentic tribute to his mentor Marvin Gaye. It really does capture the essence of the Maze magic…. that voice, that laid back ambience … “essential” indeed.

Other featured cuts include – ‘Look At California’, ‘We Are One’, ‘Southern Girl’, ‘Never Let You Down’ ‘Can’t Stop The Love’ ,’Twilight’ and ‘Right On Time’.