MAVIS STAPLES: ‘If All I Was Was Black’ (Anti-) 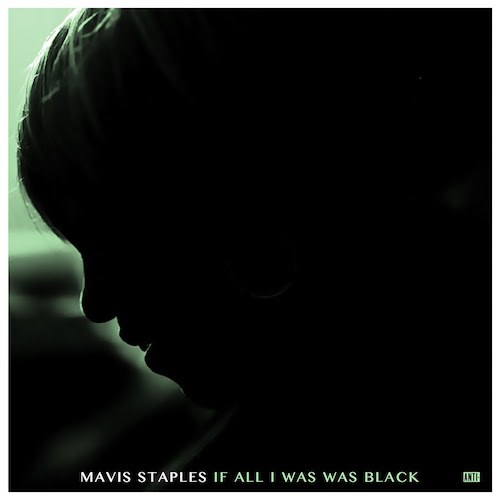 Mavis Staples is 78-years-old but still making records that matter. ‘If All I Was Was Black’ is the Chicago-born singer’s fifteenth LP of her long career and her third collaboration with noted producer, songwriter, guitarist, and Wilco member, Jeff Tweedy. It’s an album whose theme of racial discord and a polarised world reflects a dysfunctional America in the divisive Trump era. But as Mavis Staples can tell you from personal experience, it’s an America that hasn’t changed much from the days of racial segregation and persecution that she was a witness to when she began her career singing gospel music with her family in the 1950s. Mavis also was a staunch supporter of Martin Luther King Jr in the Civil Rights era but this album demonstrates that the social and political victories of those heady days of the 1960s, which seemed to augur better days ahead for African Americans,  may now be a thing of the past. The present incumbent of the Whitehouse has seen to that, fomenting racial hatred, opening up old wounds, and deepening divisions.

Jeff Tweedy (who wrote/co-wrote all of the songs specifically for Mavis) and his musical confreres provide a backdrop for Mavis that blurs the demarcation lines between soul, country, folk, gospel and rock. The music is also subtly understated, allowing the singer’s distinctive voice – which has lost none of its richness over time – to shine. All ten songs create a vivid storytelling tapestry of  protest and social commentary, though without being specific about events and people. That gives it a transcendent universality that anyone who is disenfranchised can relate to.  ‘No Time For Crying’ stands out for the tension of its driving funk beat – a mixture of Motown and Sly Stone’s ‘Dance To The Music’ – its urgency reflecting the song’s lyrics about having “work to do” even though “people are dying” and “bullets are flying.” ‘Build A Bridge,’ with its anthemic chorus, is also hopeful, and its groove is almost stately. Indeed, despite the dark sobriety of some of its themes and tone,  ‘If All I Was Was Black’ – whose title song is looking beyond skin colour and recognising our shared humanity – it’s an album suffused with light and love. That feeling is epitomised by ‘Peaceful Dream,’ whose acoustic guitar filigrees and simple percussive handclaps recall the gospel-folk style of a pre-Stax Staple Singers.

Though this is a record initially born of despair, perhaps, ultimately it is brimming with hope and posits the idea of a world redeemed of its wickedness by embracing love. That might be idealistic, perhaps, given humanity’s chequered history, but it’s a noble vision nonetheless. Of course, Mavis Staples has been around long enough to tell you that she knows it isn’t going to be easy, as she acknowledges on ‘Try Harder,’ but she’s sure-as-hell going to give it a good go. If only she was the president of the United States.  A sensational album.