MARY WELLS: The One Who Really Loves You/Two Lovers (Kent) 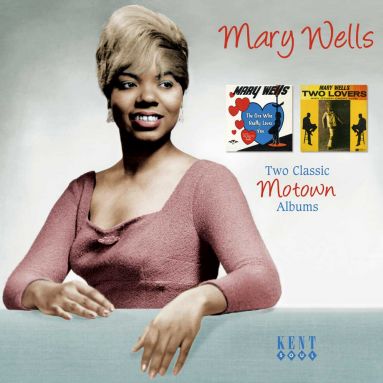 Over the last twelve months or so Motown collectors have been splendidly served by the Ace/Kent label who’ve been diligently reissuing many early Motown albums. Now the imprint has unearthed two LPs from Motown’s first super star – Mary Wells. The albums that makeup the “twofer” are 1962’s ‘The One Who Really Loves You’ and ’63’s ‘Two Lovers And Other Hits’.

Wells came to Motown in 1960 and scored straight away with ‘Bye Bye Baby’ but there followed a lean spell. To revitalize her career Berry Gordy assigned Smokey Robinson to produce her and between them they crafted the romantic, lilting ‘The One Who Really Loves You’ which after a slow start hit the R&B top 10. As was the way, Motown cobbled together an album on the back of the hit. The ten tracker was made up of old singles (A & B sides), material from the Motown/Jobette publishing catalogue and a new recording – ‘You Beat Me To The Punch’ which, when selected as the follow up to ‘The One Who Really Loves You’, reached #1 on the R&B listings. Smokey had worked his magic and Wells was flying again. Gordy, therefore, allowed more time and expense for her next album which was to be built around her next single – ‘Two Lovers’… eventually another R&B singles chart topper. The ‘Two Lovers’ LP was another 10 tracker and featured a selection of new Motown material and a smattering of standards and covers of Nat King Cole’s ‘Looking Back’ and Jesse Bevin’s ‘Guess Who’.

Here presented side by side they represent a wonderful slice of Motown history and given the difference in the way they were put together there’s a real unity – a unity that is the magical sound of early 60s Motown… a sound of naive innocence, sweet melodies, heart-warming harmonies and that remarkable, enchanting timbre that could only have been generated in the Hitsville Snakepit.

The Smokey Robinson hits still stand out (don’t overlook his ‘Laughing Boy’ as well) but as noteworthy is an early effort from Marvin Gaye. Co-penned with Clarence Paul and Mickey Stevenson, ‘My 2 Arms – U = Tears’ has all the ingredients that made early Motown music so captivating. The odd song out is Mary’s version of the Benny Goodman standard, ‘Goody Goody’. It’s odd for a young twenty something to tackle such a song but remember this was always a Gordy tactic… to get his stars to record middle of the road stuff to help pull his fledgling labels out of the ghettos and into the mainstream. The great thing about the track is the swinging backing from the jazz-trained Funk Brothers and there’s a great vibes solo too, thought to be Dave Hamilton.

Yes… like we said, a wonderful slice of Motown history, this. Let’s hope through 2013 Ace/Kent continue their excellent trawl through the Berry Gordy empire’s back catalogue.