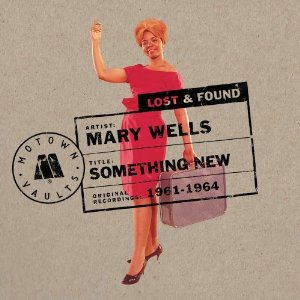 Mary Wells was Motown’s first Queen. She signed up with Berry Gordy when she was just 17 and with a series of well-crafted singles (culminating in the smash ‘My Guy’) she helped put the ex-boxer’s fledgling label well and truly on the map. The “Mary Wells Sound” – crafted with people like Smokey Robinson, William Stevenson, Brian Holland and Lamont Dozier – was the defining sound of early Motown. Quite, quite magical, it was the sound of naive innocence; a sound carried on sweet melodies and heart-warming harmonies – all wrapped in that remarkable, atmospheric timbre that could only have been generated in the Hitsville Snakepit. All of Mary Wells’ big hits have long been available on any number of retrospectives but because in those early days she was one of Gordy’s chief cash generators he recorded her prolifically and much of the stuff she recorded has at best been sorely neglected and at worst remained unissued … until now.

On this fabulous, new Hip-O Select 2 CD pack you get all of Mary Esther Well’s “extra” music… 47 ultra rare tracks – 23 of ’em issued for the very first time! Amongst the gems are four newly discovered duets with Marvin Gaye, a pair of tracks that feature the (then) struggling Supremes as backing vocalists and set of “standards” – some featuring The Four Tops. The collection is a true treasure trove for all Motown collectors. They’ll thrill to Mary’s versions of Smokey’s plaintive ‘You Can Depend On Me’, his wonderful , finger-clickin’ good ‘When I’m Gone ‘ and the man’s mesmerising ‘My Heart Is Like A Clock’. Smokey himself gets in on the vocal act when he duets with his protégé on the remarkable ballad, ‘I Want You Round’ –best known in its Marvin Gaye/Kim Weston incarnation. The Temptations are featured too; they add backing vocals to a H-D-H song ‘Your Loss My Gain’. A rousing Motown dancer, it was later rewritten and re-recorded as ‘You Lost The Sweetest Boy’… just the kind of oddity that the collectors want.

In truth, though, there’s so much  going on here that it would take page after page to detail everything. Suffice to say that the package is unmissable. Add it to Kent’s recent Mary Wells Motown twofer and soulmusic.com’s 20th. Century Fox retrospective (see our reviews pages) and you’ll have everything you’ll ever need on the early career of a remarkable and historically important talent.