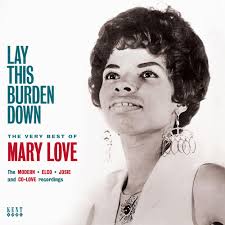 From an horrific childhood and adolescence (neglect, poverty, beatings, incest) Mary Love (born Mary Ann Allen-Varney in California in 1946) rose to become one of the most respected soul singers on America’s West Coast. Moreover, in later life she founded her own gospel church and went on –through her spiritual recordings and preaching – to inspire countless souls. Sadly she died too young. After a series of strokes she passed away in 2013, aged just 69. Before her untimely death though she had managed to perform in the UK where she was hugely respected by the knowledgeable soul crowd there. To satisfy those fans, back in 1994 oldies specialists, Ace/Kent issued a Mary Love album and now – some 20 years later – they update that album with this splendid 25 track career overview.

With a title taken from a 1966 recording that became a huge tune on the Northern soul circuit, this retrospective collects Mary’s best recordings from her time with Modern, Elco. Josie and Co-Love Records. The Modern tracks – which include that wonderful ‘Lay This Burden Down’ and the fab. H-D-H flavoured original version of ‘You Turned My Bitter Into Sweet’ – are great sixties time pieces and will bring smiles to the faces of original mods who might have come across Mary’s work on occasional Stateside releases. The two Josie releases included here (‘The Hurt Is Just Beginning’ and ‘If You Change Your Mind’) maintain the soulful quality which was undiminished when Mary moved to John W Cole’s Elco records.

Her mid-seventies output was as consistent and is represented here by cuts like the powerful ‘Joy’. In the 80s Mary found a new partner – Brad Comer. The pair married and were inspired to set up a gospel church in the Moreno Valley (some 70 miles east of L. A.) and the pair went on to record a new inspirational music … and one of the results of course was the wonderful ‘Come Out Of The Sandbox’. The song take pride of place here… as it would on any proper soul album and whether you’re spiritually inspired by its message is, I guess, a matter of where you’re coming from. But I do believe that no one could fail to be moved by the soulful commitment of Mary Love’s delivery. The song repays repeated listens and is a fitting testament to one of soul’s great, largely unsung talents.