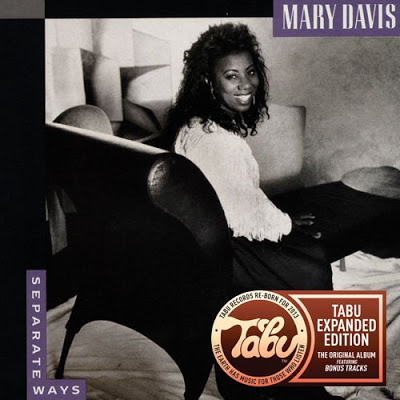 For many soul fans back in the ’80s, husky-throated Savannah songbird Mary Davis was the voice of the S.O.S. Band so when she quit and went solo in 1986, expectations were high. But her initial solo single released on Tabu a year later, ‘Steppin’ Out,’ was a routine and largely unmemorable slab of heavy electro-funk co-produced by the singer with Howie Rice. It proved profoundly disappointing and to make matters worse, the singer’s debut album didn’t follow until 1990 by which time, Mary’s career had lost crucial momentum. Said album is now reissued with bonus cuts (including the non-album single, ‘Steppin’ Out’) and though it’s good to have an opportunity to reappraise it, it appears that 24 years after the fact, ‘Separate Ways’ still doesn’t hit the spot.

One of the most memorable cuts is the opener, ‘Don’t Wear It Out,’ the only track helmed by big name producers – in this case, ex-Deele men, LA and Babyface. But even for them – who were scoring monster hits with the Mac Band, Pebbles and myriad others at the time – it sounds predictable, mundane and below par, though it penetrated the US R&B Top 20 when issued as a single. Davis’s vocals are impeccable but the material is not particularly strong or memorable – moreover, the production is dominated by tinny synths and robotic swing beat drum machine patterns. The infectious dancer, ‘Baby. Baby (You Ain’t Treatin’ Me Right),’ isn’t bad and the Bernard Terry-produced title track, a sumptuous ballad, highlights Davis’s unique vocal sonorities arguably represents the pinnacle of the album. While most of the uptempo material has dated badly due to late ’80s production values (‘Some Kind Of Lover,’ for example, with its cod rap), the ballads have fared better with the sweetly soulful ‘I Wanna Be Sure’ standing out. The album’s not bad but it’s not great either and given the superb work that Mary had done with the S.O.S. Band, to this writer’s ears back in 1990 it seemed to represent a waste of both her time and talent. If only she could have done some tracks with Jam & Lewis….