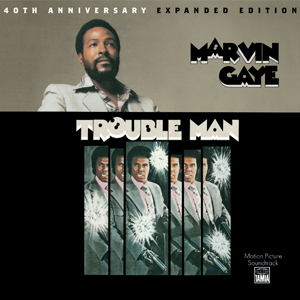 The phenomenal success of ‘Shaft’ in 1971 spawned a plethora of action movies specifically targeting African-American audiences during the first half of the ’70s. Many of the films – which gave rise to a new cinematic genre called ‘blaxploitation’ – were done on the cheap and as a result were egregiously bad: so bad, in fact, that most of them are long forgotten but ironically, many boasted superb soundtracks that were created by some of the leading lights in soul and funk music. On ‘Shaft,’ Isaac Hayes cogently demonstrated how effective R&B could be when used as a backdrop to taut, urban action. Soon afterwards in 1972, Curtis Mayfield wrote a memorable score for ‘Superfly,’ a forgettable movie about a nihilistic drug dealer. Later the same year, Marvin Gaye was commissioned to provide the music for a visceral black action flick called ‘Trouble Man’ starring Robert Hooks in the title role. Like ‘Superfly,’ the movie sank into oblivion but Gaye’s superlative soundtrack album, though often overlooked, remains a crucial work in his canon.

Following in the wake of ‘What’s Going On’ – Gaye’s febrile and trenchant exploration of the themes of war, drugs, religion, ecological issues and urban alienation – ‘Trouble Man’ featured a memorable title song that wouldn’t have sounded out of place on the 1971 masterpiece that Motown boss Berry Gordy initially rejected. If anything, it’s darker and grittier and the jazz vibe that Gaye imbued his music with on ‘What’s Going On’ is more pronounced on ‘Trouble Man’ due to the ubiquitous snaking saxophone of Trevor Lawrence. For the first time ever this brilliant 2-CD expanded edition of ‘Trouble Man’ presents not only a remastered version of the terrific soundtrack LP but also serves up (on a second CD) the original movie score itself, which has never been available commercially before. The movie score differs significantly from the released soundtrack album – it contains a raft of short, atmospheric cues ranging from lush orchestral washes and slow, saxophone-led blues to tense action segments and even percussive, African-inflected, pieces. The brevity of some of the segments and the juxtaposition of different moods results in a multi-hued musical tapestry that only really gains coherence when heard in the context of the movie.

By contrast, the soundtrack LP is more focused and shows a fuller development of some of the ideas presented in the movie score. It’s still edgy and experimental, with Gaye – playing a Moog synth on some tracks – exploring a soulful marriage of jazz and funk flavours that is a natural progression from what he achieved on ‘What’s Going On.’ There are a clutch of fascinating bonus tracks too on this collectable, deluxe set – they’re mostly alternate takes from the soundtrack album, including an extended version of the title track, which was Top 10 pop and R&B smash in the States. Even so and despite spawning a hit single, the fact that most of the music on ‘Trouble Man’ is instrumental in nature means that over the years the album hasn’t really received the attention it undoubtedly deserves.

With an exploration of the album’s genesis, impact and historical context provided by Andrew Flory’s perceptive liner notes, this is a reissue to be savoured by aficionados of a singer/songwriter whose influence still profoundly permeates popular music today.