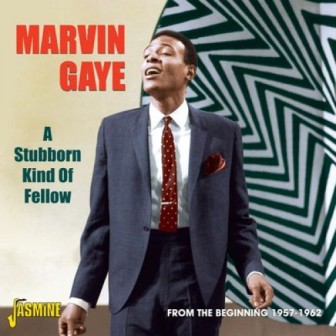 Few soul icons have had their back catalogues reissued and re-annotated as much as MARVIN GAYE has. Oddly, given his status, Gaye’s early work (and I mean really early… pre ‘Stubborn Kind Of Fellow’) has been sorely neglected though. Maybe it’s because the music he recorded between his studio debut in 1957 (backing Billy Stewart) through to his breakthrough in 1962 is considered “un-typical” of his later style. However if you’re a Gaye fan in particular or just a soul collector in general, those early recordings can help in unravelling the enigma that was to become Marvin Gaye. It is a cliché , yes, but you can’t fully understand where someone ends up till you know where they’ve been. To help in understanding Gaye, Jasmine Records now offer an intriguing 28 track album, ‘MARVIN GAYE: A STUBBORN KIND OF FELLOW’ that traces his early career via a series of landmark recordings.

Born in 1939, the son of a preacher man, MPG, from an early age, wanted to pursue a musical career. After a stint in the US Air Force he worked with a number of vocal groups – including the Rainbows (whose members also numbered Don Covay and Billy Stewart). Then Marvin teamed up with the Marquees who were managed by Bo Diddley who secured  them a deal at Okeh Records. There they cut one single but also provided backing vocals for their old pal Billy Stewart on a single…all four of those rare Okeh tracks – more doo-wop than soul – are featured on this CD. When the Marquees eventually folded Marvin joined Harvey Fuqua’s Moonglows and signed to Chess. There they backed Chuck Berry on a couple of cuts (‘Almost Grown’ and ‘Back in the USA’) as well as recording in their own right. The Berry tracks and the Moonglows ones are all here. Listen up to Marvin’s first “big moment” – the spoken intro to the doo-wop ballad, ‘Twelve Months Of The Year’.

The Fuqua connection (Harvey was married to Gwen Gordy) eventually brought Gaye to Motown where the young singer convinced Berry Gordy that he could be the next Nat King Cole! The result was Marvin’s first album – 1961’s ‘The Soulful Moods Of Marvin Gaye’, a collection of songs taken from the Great American Songbook (things like ‘Witchcraft’ and ‘My Funny Valentine’) alongside the two Berry Gordy songs that had been his first Motown single (‘Let Your Conscience Be Your Guide’/’Never Let You Go’). That whole “standards” album forms the core of this Jasmine collection and it really is an intriguing piece of work… a young man struggling to find his style. He acquitted himself well and the embryonic Funk Brothers offer innovative backing and show occasional jazzy touches (remember many of the Motown session team had come through the Detroit jazz scene). The album is closed by 8 “bonus” tracks; the singles (A and B sides) Gaye  recorded up to and including his eventual breakthrough with ‘Stubborn Kind Of Fellow’ and ‘Hitch Hike’. Worth the entrance ticket is the sweet ‘Hello There Angel’ (the B side to ‘Hitch Hike)… a personification of the charms of early Motown!