MARTHA AND THE VANDELLAS; 50th Anniversary – The Singles Collection (Universal/Motown) 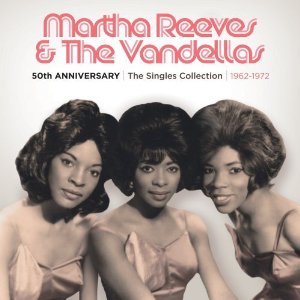 Despite being responsible for two label defining singles (‘Heat Wave’ and ‘Dancing In The Street’), Martha and the Vandellas never really became Motown A listers. Mr Gordy (as we all know) was too busy with another female trio. That said, Gordy once admitted that Martha and the Vandellas’ wonderful ‘Come And Get These Memories’ defined “his” Motown sound. “That’s the Motown sound”, enthused the ex-boxer when Holland-Dozier-Holland played him the record back in January ’63 and thus a template was laid down… tweaked and gently modified, that template served a whole Motown generation and made Gordy a billionaire. As for Martha Reeves ( and the five girls who at various times made up the Vandellas), well, they continued to languish in the shadow of the Supremes.

If Gordy still wants his “memories”, though, there are plenty here on this quite excellent 3 CD, 82 tracker that brings together all the Vandellas singles between 1962 and 1972. Naturally all the big tunes are here and things like ‘Heat Wave’, ‘Dancing In The Street’, ‘In My Lonely Room’, ‘Nowhere To Run’, ‘Quicksand’, ‘Jimmy Mack’ and ‘Third Finger Left Hand’ still sound as vital and energized as the day they were recorded. As outstanding is the slightly lesser know ‘My Baby Loves’ – one of Ms Reeves’ personal favourites. The all-too brief Earl Van Dyke/James Jamerson intro is another defining Motown moment.

The B-sides were always great tunes too. Remember in those days the Motown producers and writers hustled fiercely to get their work onto 45 just to keep themselves in the Gordy sight-line. Case in point is the quite remarkable ‘A Love Like Yours (Don’t Come Knocking Everyday)’ – a sure fire winner but relegated to the B-side of ‘Heat Wave’.

Motown collectors will be delighted that this 50th anniversary collections boasts a whole 27 tracks that have never been available before. They are a mix of Motown originals and covers of pop hits and standards and the quality is always first class. ‘SOS (Girl In Distress)’ has hit stamped all over it while ‘Don’t Say You Love Me’ shows Martha in a mellower moment.

As ever with these Motown specials, the packaging and notes are exemplary. You get loads and loads of archive photos and full annotation – which often reveal facts to satisfy the most demanding of anoraks. For instance we’re told that on some of the recordings there were never any Vandellas present while on ‘I Can’t Dance To That Music You’re Playing’ much of the lead vocal is Syreeta Wright while the backing vocals come from the ever-dependable Andantes. You get three different versions of that song, by the way… some with Martha, some with Rita; spot the difference!