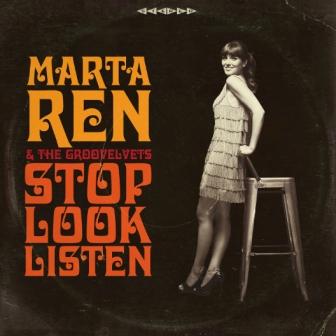 Marta Ren is Portugal’s premier soul singer. She’s been in the business since the 90s and with a (we’re told) dynamic live show and two locally-acclaimed albums under her belt she’s a big draw in the clubs of her home town Oporto and on the wider Portuguese festival circuit.

Last year her single –the brassy, brash and bold ‘I’m Not Your Regular Woman’, won lots of airplay across Europe (notably on BBC 6) and it filled floors in the kind of clubs that embrace the marriage of old school funk (in the mode of Marva Whitney) and the more contemporary, tough soul of, say, Amy Winehouse.

To consolidate on the success of the single, Marta and her band (the tight and funky Groovelets) have just unleashed this new long player which offers a full 12 tracks worth of the combination we’ve just described.

‘Stop Look Listen’ is topped and tailed with two remarkable funk workouts… ‘Don’t Look’ and ‘I Wanna Go Back’. Both are straight out of the Sharon Jones/Daptone school of retro funk and soul. They’re fast and furious and spiced with biting guitar, mad Hammond and punchy brass. There’s more of the same on ‘Release Me’ whose parping brass is based on classic Stax. That brass is right up front too on the Cliff Nobles’ ‘Horse’ inspired instrumental ‘Be Ma Fela’

Elsewhere ‘It’s Today’ is a touch lighter… more of a Northern flavour while ‘2 Kinds Of Men’ takes its drum pattern from ‘Get Outta My Life Woman’. Highlights though are the more sombre moments… ‘Smiling Faces’ and ‘I’m Coming Home’. It’s that last one that made me make the Amy Winehouse comparison earlier on. Marta herself, though, would prefer comparison with Sharon Jones and the several other funk divas she name checks on ‘I Wanna Go Back’

Marta Ren’s ‘Stop Look Listen’ is released on February 19th on vinyl, CD and as a download.